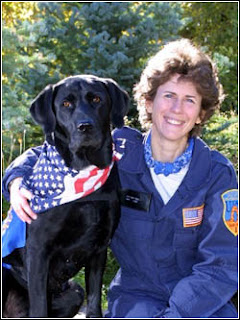 Jake, a black Labrador who became a national hero after burrowing through white-hot, smoking debris in search of survivors at the World Trade Center site after the 9/11 attacks, died Wednesday after a battle with cancer.

Owner Mary Flood said Jake had been in pain and had a 105-degree fever. She had him put to sleep after a last stroll through the fields and a dip in the creek near their home in .

It is not known if the black Lab became sick, as have many rescue workers, because of exposure to the toxic air at Ground Zero. Cancer in dogs of Jake’s age is quite common.

Some rescue dog owners who worked at the WTC site claim their animals have died because of their work, but scientists who have spent years studying the health of search-and-rescue dogs have found no sign of major illness in the animals.

The results of an autopsy on Jake's cancer-riddled body will be part of a medical study of Ground Zero dogs.

Flood had adopted Jake as a 10-month-old disabled puppy whom she found abandoned on a street with a broken leg and a dislocated hip.

But against all odds, he became a world-class rescue dog, explained Flood, a member of Utah Task Force 1, one of eight federal search-and-rescue teams that looked for human remains at Ground Zero.

After Hurricane Katrina, Flood and Jake drove 30 hours from to , where they searched through the rubble of flooded homes in search of survivors.

In recent years, Jake helped train younger dogs and their handlers across the country. Jake showed other dogs how to track scents, even in the snow, and how to look up if the scent was in a tree. He also did therapy work with children at a camp for burn victims and at senior homes and hospitals.

"He was a great morale booster wherever he went. He believed that his cup was always full, never half-full. He was always ready to work, eager to play - and a master at helping himself to any unattended food items."

Jake's ashes will be scattered "in places that were important to him," said Flood, including his training grounds and the rivers and hills near home where he swam and roamed.

Posted by Shaun Mullen at 8:27 AM
Email ThisBlogThis!Share to TwitterShare to FacebookShare to Pinterest