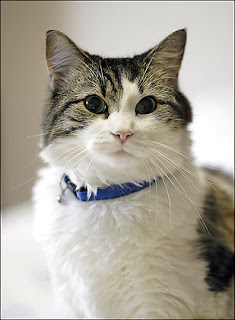 Anyone who has been around cats for any length of time -- especially those of us who have a deep love and respect for them -- know that they can be uncannily prescient. As independent minded as they seem to be, say compared to dogs, they understand us in ways that those slavishly loyal canines usually cannot.

This brings us to the story of Oscar, a hospice cat at a nursing home who seems to have an uncanny ability to predict when patients are going to die.

Herewith the opening paragraphs of a New England Journal of Medicine article on this extraordinary feline:

Oscar the Cat awakens from his nap, opening a single eye to survey his kingdom. From atop the desk in the doctor's charting area, the cat peers down the two wings of the nursing home's advanced dementia unit. All quiet on the western and eastern fronts. Slowly, he rises and extravagantly stretches his 2-year-old frame, first backward and then forward. He sits up and considers his next move.

In the distance, a resident approaches. It is Mrs. P., who has been living on the dementia unit's third floor for 3 years now. She has long forgotten her family, even though they visit her almost daily. Moderately disheveled after eating her lunch, half of which she now wears on her shirt, Mrs. P. is taking one of her many aimless strolls to nowhere. She glides toward Oscar, pushing her walker and muttering to herself with complete disregard for her surroundings. Perturbed, Oscar watches her carefully and, as she walks by, lets out a gentle hiss, a rattlesnake-like warning that says "leave me alone." She passes him without a glance and continues down the hallway. Oscar is relieved. It is not yet Mrs. P.'s time, and he wants nothing to do with her.

Oscar jumps down off the desk, relieved to be once more alone and in control of his domain. He takes a few moments to drink from his water bowl and grab a quick bite. Satisfied, he enjoys another stretch and sets out on his rounds. Oscar decides to head down the west wing first, along the way sidestepping Mr. S., who is slumped over on a couch in the hallway. With lips slightly pursed, he snores peacefully — perhaps blissfully unaware of where he is now living. Oscar continues down the hallway until he reaches its end and Room 310. The door is closed, so Oscar sits and waits. He has important business here.