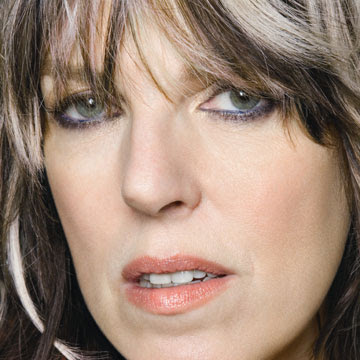 No thanks to commercial radio, we live in a golden age of woman folk and rock singer-songwriters. They include, to name just a few of my favorites, Suzanne Vega, Nancy Griffith, Rosanne Cash, Sarah McLachlan, Feist, Tori Amos and Jonatha Brooke. All in one way or another owe an immense debt to Joni Mitchell.

With very few exceptions, don't expect to hear any of these women on commercial radio. You have to tune into the rare progressive rock station or college station, or go on the Internet for downloads.

Then there is singer-guitarist-songwriter Lucinda Williams, who has followed up her 1998 hit album Car Wheels on a Gravel Road, which followed a decade in which she labored in semi-obscurity, with one great disk after another, most recently West, which was released earlier this year.

Williams certainly leads that pack of signer-songwriter faves whom, as a crossover artist, you do get to hear on commercial radio, as well as unexpected venues such as my local stupidmarket. It was a bit of a shock to pick up a couple of cartons of O.J. the other day to the accompaniment of Williams singing “Drunken Angel,” one of the many fantastic songs on Car Wheels, in her distinctive quirky-warbley voice.

This was supposed to be the point in the article where I segued to Williams’ appearance earlier this week at the Mountain Laurel Center For the Performing Arts in the Poconos of Northeastern Pennsylvania, but things didn’t quite work out.

The Mountain Laurel Center is as undiluted an example of a taxpayer-funded boondoggle that I have encountered in many years.

The facility – a concert shed with stage and 2,500 seats that opens out onto a lawn – was advertised as a state-of-the-art entertainment venue that would draw visitors from as far away as and with world-famous performers.

But from the outset, Mountain Laurel was a feedbag for area politicians. It sucked up $15 million in public money before it opened in 2004 and then didn’t have enough money to operate.

A big part of the problem was where Mountain Laurel was sited: Not close to Interstate 80 and the major population and tourism centers in the Poconos, but 20 miles away in . The facility can only be reached by two-lane highway, the last several miles of which are narrow, winding and dangerous even in good weather.

Despite further injections of taxpayer money and an increase in local hotel taxes, Mountain Laurel struggled through its first two seasons.

This included an attempted visit by the Dear Friend & Conscience, who was turned away at the box office because she did not have a photo ID. It seems that Mountain Laurel had been identified as a terrorist target or something and a security guard told her that an ID was mandatory in the post-9/11 world of rock concerts. Inane, but true.

Mountain Laurel was shuttered for the third season. Having been milked dry by those pols, it was sold to a private developer in 2006 who paid off $17 million in bonds and other debts, and concerts resumed. The developer then leased the center and 42 acres used for parking and lawn seating back to the center's board of directors. A win-win situation for the developer and a lose-lose situation for everyone else except those happy pols.

Then there is the facility itself.

This is the part of the movie where I brag that I have gone to concerts at outdoor facilities, include sheds with lawn seatings, in perhaps 50 locations on three continents, so I know what I'm talking about, okay?

On that basis Mountain Laurel is easily the worst of the bunch.

Despite its lush surroundings, the area around the concert shed – which is called the Tom Ridge Pavilion – looks like Vietnam jungle after being defoliated by Agent Orange. There are no plantings. As in none. The parking lot is a dustbowl and the shed itself has the ambiance of an aircraft hangar. Check that. I have been in aircraft hangars that are nicer.

The lawn above the shed is so steep as to be dangerous to all but the most athletically inclined. We parked our folding lawn chairs on the slope, but constantly felt like they were going to tip forward and topple us down onto the promenade connecting the shed to the lawn. Despite a no-smoking policy, we were downwind of a small man with a large cigar and a blonde on each arm and had to endure his smoke.

Then there are the acoustics.

In a word, they sucked. The sound projected through the speakers outside the shed was much too loud and extremely distorted. The sound in the shed was only slightly better and was not helped by the skimpy house, which was about one-third full.

As for Lucinda Williams and her band, they rocked. But after four or five songs, a violent thunderstorm broke and the DF&C and I were chased back to the car. A karmic thunderstorm if you will. Soaked to the bone, it was obvious once we navigated those dangerous roads through a thick fog and reached the main highway that the storm had been confined to the area immediately around Mountain Laurel.

Posted by Shaun Mullen at 11:30 AM
Email ThisBlogThis!Share to TwitterShare to FacebookShare to Pinterest