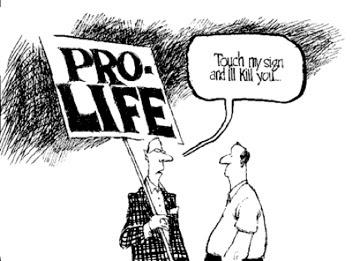 This week, anti-choice extremists are protesting at a clinic — the same clinic that was bombed by Eric Rudolph less than a decade ago. They’re also targeting a clinic in — a clinic operated by Dr. George Tiller, a man who has been shot in both arms, stalked, and threatened by "pro-life" activists. His home address is published on "pro-life" websites so that anti-choice terrorists can find him and assassinate him like long-time "pro-life" activist James Kopp did to Barnett Slepian. Unsurprisingly, Dr. Tiller wears a bullet-proof vest to work and lives in a gated community with a strong security presence.

I hate that these stories make me feel like a petty, small man, but I relish them with almost unrestrained glee every time I come across them. I don’t like people outing people, I don’t like people having their private lives used against them- even if they are hypocrites.

I guess there is a simple solution, though- If you are an elected offical, stop fucking prostitutes while pushing idiotic morality laws and advocating jail time for the rest of us for the same behavior.

When Gareth Groves brought home his massive new Hummer, he knew his environmentally friendly neighbors disapproved. But he didn't expect what happened next. The sport utility vehicle was parked for five days on the street before two masked men smashed the windows, slashed the tires and scratched into the body: "FOR THE ENVIRON."

There should a statute of limitations on stupid things that we said that can come back to haunt us. I propose 24 hours

An embarrassing confession: On my birthday, I spent the whole day at work wishing my boyfriend, who was out of town, had sent me flowers. The romantic in me had hopes.

I think most guys don't think about flowers. Or they think they're silly. Or a waste of money. Or they think their girl hits one of those bases. Not all women like flowers. How to even know? But with my boyfriend out of town, flowers on my birthday would have made my day.

Harry Potter is a terrible role model. He is a petulant, self-pitying brat who routinely breaks rules that he believes don't apply to him. In the anything goes, slippery slope morality of Harry Potter's world, nothing is taboo, not even having an affair with a horse, as he did last year on the London stage. He thinks the world owes him something just because he had the misfortune of losing his parents and he doesn't show the least bit of gratitude to the kindly Dursleys for taking him in without any kind of compensation despite all the trouble he has caused them. If he had lived in Charles Dickens' he would have been shunted off to an orphanage or prison, which at least would have toughened him up and saved us from his relentless whining. Unfortunately, is a different place than it was in Dickens' time, when it ruled a great empire. Now its citizens live coddled lives, taking long vacations, living off the dole and depending on socialized medicine, while Muslims slowly begin to take over their overly indulged society. It is certainly a different place from the , where we take very few vacations, we force single mothers to work and some people don't have any medical care at all. Although President Bush has stood as a bulwark against indulging children with medical care they cannot afford to pay for, for example, the insidious influence of British socialist propaganda like the Harry Potter books will not make this task any easier.

There is a fundamental reason to doubt the link between economic inequality and unhappiness. If the egalitarians are right, then average happiness levels should be falling. They aren't.

There were many good spots in the 's Ring, but I can only explain the third act of last night's Götterdämmerung as some kind of delayed revenge for the Great Patriotic War. 's amnesia potion was so effective that the Siegfried forgot not only his wife but his lines. And as for the eponymous climax . . . well, I propose opera houses borrow a page from reality television and allow audiences to vote during the finale: If the Brünnhilde turns in a performance like Olga Sergeeva's last night, the flames in the pyre are real.