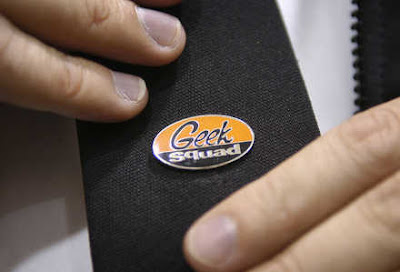 Allegations of Geek Squad agents copying pornography, music and racy photos from customers' computers are circulating on the Internet. "Any attractive young woman who drops off her computer with the Geek Squad should assume that her photos will be looked at," says a former employee.

1. Having been absolutely certain that the war was the right thing to have done, and that we would prevail easily, I am no longer confident that I can discern when emotion is affecting my judgment unduly.

2. I no longer implicitly trust governmental institutions, including the military -- neither in their honesty nor their competence.

3. I no longer believe the Republican Party is superior in foreign policy judgment to the Democrats.

4. I no longer have confidence in the ability of our military, or any military, to solve deep cultural and civilizational problems through force alone. I mean, I thought nothing could stand in the way of the strongest military fielded since the days of ancient . No more.

5. I have a far greater appreciation for how rare and fragile liberal democracy is, and a corresponding revulsion at the American assumption that it's the natural state of mankind. Which is to say, the war has made me rethink my ideas about human nature, and I'm far more pessimistic now than I ever was.

Remember a while back when an outcry went up about how few Iraqi refugees the was admitting? Then the pledged to take 25,000, a whopping one percent, of the 2.2 million estimated to need resettlement?

We were supposed to resettle 7,000 in FY '07 (which ends in September), but the recently announced we would only process 2,000 by then. Only 133 have made it into the country so far, apparently thanks mostly to the careful work of the Department of Homeland Security.


By most accounts, Gonzales has now emerged as the real “uniter not a divider” — uniting Democrats and independent minded Republicans in a belief that he is the worst man at the worst time in the Attorney General’s post. And it’s likely history will record him as such.

(Hillary) has a three-decades-long record of working on issues related to women and families, and she's seeking the presidency at a time when national security is paramount. If she's talking more about Iraq than family and medical leave, that's less about trying to overcompensate for the inconvenient fact of her gender than what issues are at the top of voters' agendas.

But as a columnist who happens to be a woman -- you may have noticed, there aren't too many of us -- I understand what (John) Edwards means. In fact, I initially resisted writing about her comments, reluctant to be pigeonholed as a "woman columnist" and not taken seriously by the Big Boys.

faces that challenge on a grander and more complex scale. Any woman in the post-Sept. 11 world faces an extra hurdle in convincing some voters that she's strong enough to be commander in chief. has the extra challenge of appearing simultaneously formidable and likable, commanding and not cold, smart and approachable.

Traffic deaths in the fell to their lowest total in five years in 2006, and the rate of deaths per miles traveled dropped to a record low.

. . . Motorcycle deaths increased for the ninth straight year and for the first time exceeded pedestrian deaths.

A remote Macedonian mountain village is at the centre of a treasure hunt for bottles of what is thought to be vintage cognac from World War I.

Farmers in Gradesnica have unearthed what they say are cases of spirits from trenches once used by French soldiers.

Visitors from France have joined locals scouring the former battlefield in the hope of finding some of the liquor.

Valued at thousands of euros a bottle, it is said to have survived a German shell strike that killed many soldiers.

The first case of 15 bottles was reportedly unearthed by villagers in the south of the former Yugoslav Republic of Macedonia about 15 years ago.
-- BBC

Shambo, the Hindu temple bullock with TB, is on death row again after the court of appeal overturned a judge's decision to spare him.

But as interest in the case intensifies around the world, from Canada to India, Shambo's fate is still uncertain.

The Skanda Vale monks have once again appealed to the Welsh authorities to carry out a second test for TB, but have been turned down. The monks may even take the case to the House of Lords.