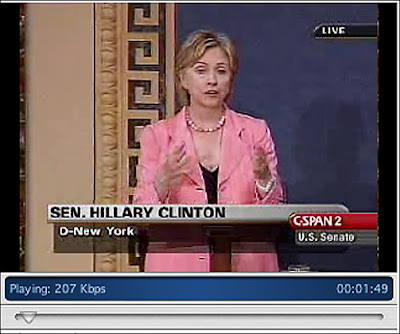 This became an issue last fall in Alabama, when The Associated Press noted in a report on Loretta Nall, the Libertarian Party candidate for governor:

"[She is] campaigning on her cleavage and hoping that voters will eventually focus on her platform."

Now I'll be the first to admit that while my thoughts do occasionally turn to breasts, I do not lie awake at night pondering the issue, but there it was again the other day in the WaPo when fashion writer Robin Givhan wrote about the "interest" in Hillary Rodham Clinton’s neckline on the Senate floor:

"With Clinton, there was the sense that you were catching a surreptitious glimpse at something private. You were intruding — being a voyeur . . . Showing cleavage is a request to be engaged in a particular way."

I guess you had to have been there because whenever I have been in the same room with Hillary, including a meeting when I was right across the table from her, I can say in all honesty that I was not drawn to her breasts.

Without going off the deep end and examining whether any of the male presidential wannabes show any . . . well, I did notice a bit of a bulge in one candidate's pants during a recent debate . . . I gotta tell you that this cleavage thing is beyond silly, especially when someone like Givhan tries to get all weighty.

Cleavage is a matter of personal choice. Let's leave it at that, okay?

Posted by Shaun Mullen at 2:39 PM
Email ThisBlogThis!Share to TwitterShare to FacebookShare to Pinterest