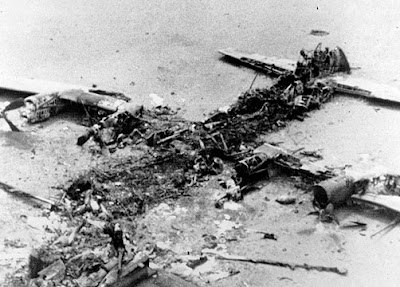 DESERT ONE: THE AFTERMATH

Although the mission had originally been viewed as preposterous, it gradually had come to seem feasible. It included a nighttime rendezvous of helicopters and planes at a desert landing strip south of Tehran where the choppers would refuel before carrying raiding parties to hiding places just outside the city. There they would stage an assault on the U.S. embassy, spirit the American hostages to a nearby soccer stadium and then ferry them to a seized airstrip where transport planes would carry them to freedom.

The year was 1980. The president was Jimmy Carter.

The intelligence on the ground and surveillance photographs cinched it: Osama bin Laden had been found. The White House gave the green light and orders were executed to launch an attack. Then, at the last minute, an intelligence officer noticed something disturbing in the photographs: A swing set, which indicated that children were present. Fearful of the negative publicity that the deaths of children and other civilians would cause, especially if it turned out that the Al Qaeda leader was not present, the attack was aborted at the last minute.

The year was 1999. The president was Bill Clinton.

The intelligence on the ground and surveillance photographed cinched it: A senior Al Qaeda leader and his coterie had been found. The White House gave the green light and orders were executed to launch an elaborate raid to capture the terrorists. Then, at the last minute, senior White House officials got cold feet, deciding that the operation was too risky and could jeopardize relations with a key ally.

The year was 2005 and the president was George Bush.

The first event is described by Mark Bowden in his seminal Guests of the Ayatollah, the second by Steve Coll in his equally excellent Ghost Wars, and the most recent, of course, is the big story of the moment. As well it should be, but not for obvious reasons.

What we have here is an extraordinary déjà vu moment that however transitory puts a human face on American leaders in the decades’ long war against militant Islam, the inherent conflicts between politicians and intelligence officials, and the draconian task of weighing what seems like doing the right thing against the specter of failure and being scapegoated.

When viewed as a whole, these three events put the enormity of that war in a fresh perspective. This has the signal result of making the partisan yammering over who is tougher on terrorism even more trivial, as well as putting the Bush administration lapdogs at Fox News and the conservative media and blogosphere in their smarmy place.

Donald Rumsfeld is revealed as not being soft on terrorists, of course, but being necessarily and appropriately concerned about the fallout – collateral human damage and political and diplomatic repercussions -- should an operation that was eerily reminiscent of Carter’s Desert One fiasco for its daring and complexity fail.

is revealed as not being soft of terrorists, which he was not, but also being necessarily concerned about the same issues that confronted Rumsfeld.

Carter also is so revealed, but he boldly – and in hindsight foolishly – went ahead, effectively destroying his presidency.