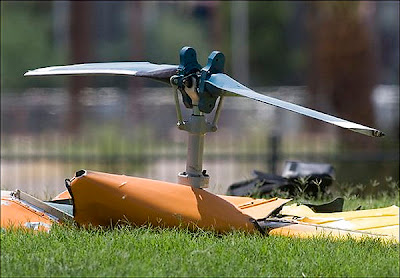 Ever since the slow-mo aerial chase of O.J. Simpson and his white Bronco in 1996, news directors have dispatched their copter crews on costly missions to provide live footage of all manner of un-newsworthy traffic jams, fires and car chases.

Apart from the lives of the newsmen lost in helicopter crashes over the years, it costs no less than $1 million a year to operate a modest-sized news chopper carrying a crew of two, according calculations based on information published at Helinews.Com. That’s enough money to hire 10 to 15 journalists to develop real stories.

If this latest accident finally causes the industry to wise up and ground its extravagant fleet of noisy and air-polluting helicopters, then the grieving families of the newsmen would have the modest comfort of knowing their loss wasn’t in vain.

As a country founded on the principle of majority rule, most of us have yet to accept that a small cabal of extremists infiltrated and wrested control of our government. Despite Bush & Co.’s violations of our trust, we remain incapable of believing they’d commit an act as "befuddling," according to the title of the incomparable Gareth Porter's latest article, as attack .

We are in half-full-or-half-empty terrain here. Those of us who love our country but hate the war and see it through the glass darkly can only hope some of this is true.

But it will take a lot more to persuade us to bear the continuing loss of American lives because, as the Brookings Institution warriors put it, “there is enough good happening on the battlefields of Iraq today that Congress should plan on sustaining the effort at least into 2008.”

Bush, Cheney et al have begun their of the Bulge, but Congress should have the good sense and guts to see a last-gasp counterattack for what it is.

I know readers of this blog understand this, but it's amazing that the rather obvious fact that for years the entire " policy" has simply been to postpone leaving until after Bush leaves office has managed not to penetrate the skulls of some of our very smart pundits.

Young people react with hostility to the Republicans on almost every measure and Republicans and younger voters disagree on almost every major issue of the day. The range of the issue disagreements range from the most prominent issues of the day (, immigration) to burning social issues (gay marriage, abortion) to fundamental ideological disagreements over the size and scope of government. This leaves both potential Democratic nominees with substantial leads over Rudy Giuliani, but importantly, both Democrats still have room to grow their support among younger voters. The current problems with the Republican brand are not fully reflected in young people’s preferences for President.

It flew through the air with the greatest of ease/The daring young meme in the fine claptrapese.

Can Hillary Clinton actually lose a campaign scuffle? Before this weekend most reporters (and Republicans) would have said no: Mrs Clinton's a brutal campaigner whose two serious rivals for the Democratic nomination are—to be uncharitable about it—handsome, inexperienced ciphers. Barack Obama had been running for sixth months without really engaging Mrs Clinton, and John Edwards couldn't throw a punch if you shoved the target at his fist.

ut the evidence suggests that Mrs Clinton actually lost ground in a fight with Barack Obama.

Good news readers! I’ve gone mad! I don’t know what it was that tipped me over the edge but I’m now a signed up 27%er and I’ve decided to start applying my new grasp of the scientific method! After all, our scientific institutions are being destroyed by the leftist politicised science of global warming and the Lancet study, and that’s just not on. Luckily my cheerful attitude and can-do approach to statistics survived my trip to the dark side so I’ve been hard at work all morning applying the sort of tenacious scientific critique that my new status as a crazy person allows me to carry out with no qualifications whatever.

I am a regular reader of your article. And I am very impress with your blog upon Global Warming. Now I am also write a blog upon Global Warming. This blog is collection of news & reviews like the study found that global warming since 1985 has been caused neither by an increase in solar radiation nor by a decrease in the flux of galactic cosmic rays. Some researchers had also suggested that the latter might influence global warming because the rays trigger cloud formation.