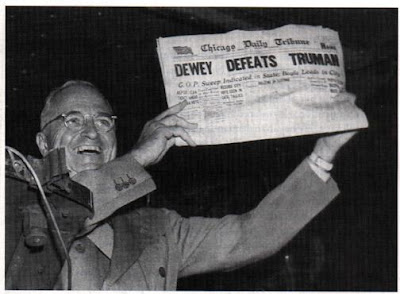 The latest Presidential poll shows 63 percent of Americans think we will elect the first woman to be President next year. It’s time for Hillary Clinton to start worrying.

The stage could be set for a Republican to pull off what Harry Truman did in 1948 to the poll-anointed sure bet, Gov. Thomas Dewey of .

The parallels are there. With a big lead in the polls, Dewey ran an ultra-cautious campaign, making “The future lies ahead” speeches while awaiting coronation.

Truman took off on his "Give 'em hell, Harry" whistle-stop tour, railing against a "do-nothing" Republican Congress and ended up the morning after election, grinning and holding up to the cameras a copy of the Chicago Tribune headlined, "Dewey Defeats Truman."

Overconfidence can be a killer in American elections. Voters resent being taken for granted.

All this is brought up by the almost stately tone of the campaign thus far. It’s been gaffe-free, but will that be enough?

The latest poll on views of Senator Clinton are no big surprise. Her negatives are still sky-high and there's no reason to believe they will decline. But the most important aspect of the polling, I think, is the reason for her negatives. Easily the biggest reason people give for not liking her is trust. They don't trust her. The trust issue is on both right and left.

Bush will have a lot to answer for from history but his monumental failure in articulating what is at stake in while failing to make his actions match his rhetoric will be perhaps his greatest blunder. No wonder the American people want out. When their president has failed so miserably in giving them logical, coherent reasons to support the mission, why not just give up and go home?

All of these current players, Secretary Rumsfeld, Vice President Cheney, and the president . . . had, first and foremost, very strong political convictions. My sense of it is their political faith and convictions influenced how they took information and interpreted it, how they picked up and interpreted outside events. As a former intel pro, when you don’t like the answer and you set up your own thing, you tend to get the answer you want. You hire people who think like you do or want to satisfy the boss. I’ve read much more about the current set of players, and they did set up a whole new interpretation because they didn’t like the (intelligence community’s) answers. They’ve gotten results that in my view now have been disastrous.

We must impeach the President and Vice President of the United States, and we must begin proceedings to do so immediately, not just for the purpose of exacting a punitive remedy, but also toward enacting a vitally important preventive measure--one that may be the only available means by which to protect the country from the impending imposition of martial law at home as well as the declaration of war against Iran and possibly other countries in the Middle East.

Here’s a crude generalization: after the sixties, intellect and patriotism went separate ways, to the detriment of both. This mutual hostility made intellectuals less responsible and soldiers less thoughtful. We’ve come to think of this antagonism as natural and inevitable, as it is between cats and dogs, but in fact it was a product of recent political and cultural changes in American life. The estrangement was compounded by professionalization on both sides and the adoption of inward-looking and jargon-ridden specializations: the all-volunteer military and the social-theory crowd became equally isolated American subcultures.

The wars in and have begun to close the divide.

Much has been made lately of setbacks and the resilience of the Taliban. But given its history, Afghanistan is doing relatively well.

When Condoleezza Rice took over as secretary of state, the (wishful) thinking was that the Bush administration would finally get into the business of diplomacy. Ms. Rice can be as bullying and ad hominem as her boss, but she’s also an achiever and trying her hand at persuasion was probably the only hope for salvaging the administration’s failed foreign policies and her reputation.

Two and a half years later we’re pleased to note a preliminary success for the new era: North Korea’s decision to shut down its plutonium-producing nuclear reactor in exchange for economic and eventual diplomatic payoffs. Ms. Rice managed to hold back the spoilers in the vice president’s office long enough for her negotiator, Christopher Hill, to do the deal the old-fashioned way: countless hours of negotiations and a willingness to compromise with a leader President Bush once famously said he “loathed.”

Unfortunately, in most every other area ad hominem and loathing still dominate. And there is still a perplexing refusal to do the tedious but absolutely essential diplomatic prep work.

Though federal authorities ban the growing of hemp, saying it contains tetrahydrocannabinol, the psychoactive substance better known as THC in marijuana, six states this year considered legislation to allow farmers to grow industrial hemp, and Representative Ron Paul, Republican of Texas, introduced a bill in Washington that would let states allow such crops. In state legislatures, the advocates of hemp note that it contains mere traces of THC, and that hemp (grown in other countries) is already found here in clothes, lotions, snack bars, car door panels, insulation and more.

But no place has challenged the government as fiercely as . Its legislature has passed a bill allowing farmers to grow industrial hemp and created an official licensing process to fingerprint such farmers and a global positioning system to track their fields.

A highly functional bionic hand which was invented by a Scottish NHS worker has gone on the market.

The thumb and fingers can move and grip just like a human hand and are controlled by the patient's mind and muscles.

The technology has been tested by a number of people, including US soldiers who lost limbs in the war.

[W]hat's unfortunate about (baseball great Hank) Aaron's latest turn in the public eye is that he has been reduced to a sportswriter's cheap trope. The great slugger's dignity is of interest only insofar as it can be picked up by the likes of George Will and swung in the general direction of Barry Bonds. . . . "As Barry Bonds continues his gimpy, joyless pursuit of such glory as he is eligible for," Will wrote, "consider the odyssey of 's greatest native son." Or as a Cincinnati Post headline pronounced: "Safe To Say Bonds No Aaron." Of course, with Aaron, it has always been thus. It is the singular curse of his career: to be treated like a sandwich board for the prevailing attitudes of the day.