We Can't Stand Up Until Bush Stands Down 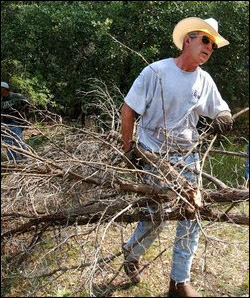 I know mah legacy is in here someplace

Recent developments have pretty much cinched that George Bush will occupy a special place in American history as a coward of staggering proportions who gave even his most steadfast supporters the finger when they tried to help salvage his presidency and he then dumped the Iraq war on his successor.

While the president technically has 18 months to prove me wrong, his continued obeisance to a strategy (if you'll pardon the term) of shifting deadlines that cannot be met and changing promises that cannot be kept while dredging up the same tired canards provides a window into the mind of someone whom, as I noted the other day, is the last person in the room to get a very bad joke.

In keeping with this strategy, the White House has rejected a call by Republican Senators Richard Lugar and John Warner to begin charting a new course in by stating that the president will await a September progress report from General David Petraeus.

Unfortunately, the September deadline has been pre-empted with Petraeus being upstaged by none other than presidential press secretary Tony Snow, who had the balls to say that "We have a new course in , and it’s two weeks old."

This certainly comes as quite a surprise to soldiers who have been battering down doors all over Baghdad for months, let alone the hundreds of families whose sons and daughters have come home in flag-draped coffins since the commander in chief flipped another bird -- this one at the Iraq Study Group -- last December.

* Despite isolated pockets of success (build a wall and they won't come), the surge strategy is falling far short of its goals. In fairness to Petraeus's tireless troopers, it had no chance of succeeding because the all-important sectarian power structures that control Baghdad's neighborhoods were not going to be toppled short of saturation bombing.

* Despite major offensives against Al Qaeda in , insurgents have stayed a step or two ahead. And while inroads have been made among the Sunni tribes of Anbar, those successes are more dependent on bribes than a lasting shift in loyalties.

* Despite Washington's attempt to lowball its own benchmarks, the Iraqi government has been barely able to meet less than half of them as sectarian violence rages on, much of it abetted by Prime Minister Al-Maliki's national police.

Despite imprecations from the Oval Office, the Iraqi parliament will take August off. This elicited a sorrowful sigh from Snow, as well as an explanation that it gets awfully hot in Baghdad that time of year and besides, the (hint, hint Democratic-run) Congress also is going on vacation.

If any of this is progress, there’s a bridge in that I’d like to sell you.

Then there's the steady drumbeat of lies and distortions, most glaringly the same old snake oil that those insurgents our men and women are chasing around Anbar and Diyala provinces were responsible for the 9/11 attacks. (That fiction seems to be working to some extent, although it turns out that a majority of the bad guys are from our dear ally Saudi Arabia, and not Iran and Syria as the Bushies would have you believe.)

Things are so bad that even William Kristol, darling of the Twenty-Six Percenters, now tempers his rose-colored view by bow-wowing that the Bush presidency "will probably be a successful one" (italics mine) because there hasn’t been a terror attack on U.S. soil since 9/11 and the economy is going great guns.

The former, of course, is more a matter of luck, Homeland Security Secretary Chertoff's instantly notorious "gut feeling" remark aside, while the economy is indeed doing super if you measure it by the record numbers being posted on Wall Street and not the record number of home foreclosures on Main Street.

Kristol has long been accused of feeding Bush his own lines, so it probably was with malice of forethought that he wrote that "Following through to secure the victory in Iraq and to extend its benefits to neighboring countries will be the task of the next president."

With even a leading Republican pollster saying that the party has almost no chance of keeping the White House in 2008, GOP honorables neutered by their own leader's implacability are left to contemplate using that dread Democratic procedural cop out -- the (gasp!) filibuster -- as they eye the lifeboats and try to figure out how to save their political hides.


Perhaps in a less delusional moment, Kristol recognizes that the single greatest impediment to anything positive happening regarding Iraq -- most notably a carefully planned phased withdrawal of American troops -- is George Bush himself.

The president, having had the bad sense to listen to Kristol and other neocon crackpots back when his presidential bicycle still had training wheels, stood up and declared the wrong war in the wrong place at the wrong time and now has no intention of standing down until it's time to pedal back to Crawford.

Shaun, you say: " Despite major offensives against Al Qaeda in Mesopotamia, insurgents have stayed a step or two ahead."
Even you fall into the trap.
Insurgents are wholly separate from Al Q.
Problems in Iraq, in order, by CIA, are Insurgents, sectarian strife, criminal elements, general anarchy and Al Q.