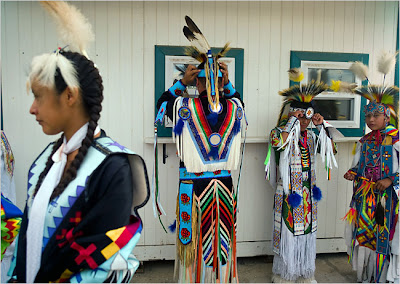 Many American Indian tribes count on money-losing casino gamblers to generate most of the income for their members. The Southern Ute tribe, whose 700,000-acre reservation in the sits on one of the world’s richest deposits of methane found in coal seams, is a lot luckier.

After many years of struggling to gain control of its natural resources from big energy companies, the Southern Utes now control the distribution of roughly 1 percent of the nation’s natural gas supply. Thanks to high gas prices in recent years and lucrative investments in and beyond the energy sectors, this once-impoverished tribe is now worth about $4 billion. Each of its 1,400 members is a millionaire many times over, on paper anyway.

The Southern Utes are not just sitting on their wealth. They have become a model for other resource-based tribes and an energy powerhouse in . And as gas prices have softened, the tribe has recently sought to diversify by becoming a real estate investor, too, buying up swaths of valuable land and buildings in La Plata County and throughout the West.

The fiasco provides few opportunities for mirth. But one is watching Fred Hiatt, czar of the Washington Post editorial page, try to kick up enough dust to wriggle out of his own position on the war.

A necessary preliminary to this discussion is to realize that there is probably no editorial page in the United States that has advocated more influentially on behalf of the Iraq catastrophe at every stage in the unfolding disaster -- from the Iraq Liberation Act, the the WMD and al Qaeda bamboozlement, to the lauching of the war, to the longstanding denial of what was happening on the ground to the continuing refusal to brook any real change of course in policy. Other papers have been more hawkish, certainly. But because of its location in the nation's capital and even more because of its reputation as a non-conservative paper, the Post's fatuous and frequently mendacious editorializing has without doubt had a greater role in pushing the public debate into the war camp than any other editorial page in the nation.

There is no more urgent task than improving medical care for wounded veterans, whose shameful neglect is yet another failure of the shockingly mismanaged Iraq war. The warriors bear scars from physical and psychological trauma and a chaotic government bureaucracy.

A presidential commission hurriedly created in the wake of scandalous accounts of mistreated and forgotten veterans yesterday issued a series of sensible recommendations for repairing the damage, including a major overhaul of the way disability pay is awarded and providing more support for family members who must shoulder the long-term burden of caring for their wounded loved ones.

Making all the required improvements, the commission’s report said, would require "a sense of urgency and strong leadership." Unfortunately, there is no sign that the White House either grasps the urgency or is prepared to provide that leadership. All the more reason for Congress to force reform on the president.

Six years removed from 9/11, I'm appalled that no one seems to care whether we find and kill Osama bin Laden.

How else to explain that there have been seven presidential debates so far - four for the D's, three for the R's - and only one question has been asked that touched on the subject of finding bin Laden in Pakistan.

We're talking close to 15 hours of debate, covering everything from family values to favorite teachers, and only one question - from an audience member, mind you - that even broached the topic of .

Monday night's CNN/YouTube experiment was just the latest setting where the issue was invisible. But it was no doubt the most shocking given recent news on the bin Laden/Pakistan front.

The "trial" of David Hicks, which took place in March 2007, was a charade.

A pre-trial agreement had been signed and the balance of the legal proceedings was entirely surplus to requirements, although designed to lay a veneer of due process over a political and pragmatic bargain. The veneer cracked immediately.

Ultimately, there has been no benefit from this process; only a corrosion of the rule of law.

No ground can be claimed to have been made in the so-called War on Terror. The Military Commission process at likewise has neither gained from it, nor shown any prospect of improvement.

Predictably, there has been no response from the Australian Government to the consistent and widespread criticism of the Military Commissions and generally. Their support for this process has been shameful.

The instability in the has forced the hand of the moderate Arab states. They have realized, somewhat belatedly, that the greater threat to their fiefdoms comes not from or the West but from the radicals they have nurtured as threats against both. . . .

These states need to tend to their own back yard. They never really cared about the Palestinian cause, using it as a strawman to channel the rage their populaces felt at their oppression. Now that rage threatens to swallow their regimes …reaching accommodation for the Palestinians will bring them a measure of peace, and hopefully marginalize the radical Islamists they have unleashed.

And threatens to use that weapon against them . . .

When history looks back at the disgrace of the Bush presidency, the one celebrated quote that will help capture much of what went wrong will be John DiIulio’s. It was DiIulio, the first director of the president’s White House Office of Faith-Based and Community Initiatives, who told Ron Suskind, "What you’ve got is everything — and I mean everything — being run by the political arm. It’s the reign of the Mayberry Machiavellis."

DiIulio wasn’t expressing disgust so much as disappointment. A conservative Dem and serious academic, DiIulio thought Bush’s White House would be a place where ideas and policy mattered. With the benefit of hindsight, it’s rather difficult not to laugh.

But DiIulio was taken in by the bogus pitch. He notes today in the Philadelphia Inquirer that it was eight years ago this week that Bush delivered his first campaign speech, which DiIulio helped write, titled "The Duty of Hope." Candidate Bush rejected as "destructive" the idea that "if only government would get out of the way, all our problems would be solved." Rather, "from North Central Philadelphia to South Central Los Angeles," government "must act in the common good, and that good is not common until it is shared by those in need." There are "some things the government should be doing, like Medicaid for poor children."

Forget what I said about laughing; with the benefit of hindsight, it’s rather difficult not to cry.

I love sports. Always have. I grew up playing all the usual sports and eagerly tried out a lot of others when I got older. I’ve always been a big spectator, too, watching everything from football, basketball and baseball to soccer, track, cycling, volleyball, water polo - whatever was on, you know?

But these days I watch less sports than at any point in my life, and it seems likely that this downward trend is going to continue. The why is pretty simple. I was raised old school by a grandfather who grew up playing through the Depression. People who knew him back then and saw him play said that under different circumstances he might have been good enough to play in the Bigs. Maybe. Hard to say, because the hard realities of life intruded on the dreams of many in his generation. So he wound up working for a few dollars a week and playing ball on the weekends.

There was a right way and a wrong way to play. Hard, but fair. Sportsmanship mattered.

A Broward (County, ) prisoner on trial on charges that he masturbated in his jail cell will face a jury of his peers. During jury selection in the case of inmate Terry Lee Alexander, all seven jurors admitted to attorneys that they have masturbated. The awkward questioning was posed by defense attorney Kathleen McHugh, who faced 17 prospective jurors and asked point-blank who among them had never masturbated. No hands went up. Then, she went one-by-one, asking each prospective juror if he or she had ever masturbated. All nine men said yes, two of the 10 women said no.

Photograph by Kevin Moloney for The New York Times
Posted by Shaun Mullen at 5:00 AM
Email ThisBlogThis!Share to TwitterShare to FacebookShare to Pinterest