So What Gets Put Aside For Impeachment? 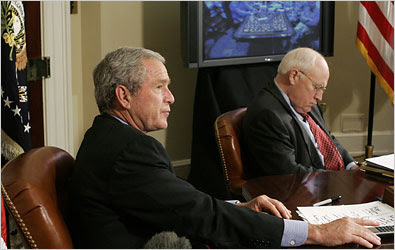 Deborah Newell Tornello, guest blogging at Ezra Klein’s place, believes that impeachment proceedings absolutely positively have to be brought against Bush and Cheney right away:

"We must impeach the President and Vice President of the United States, and we must begin proceedings to do so immediately, not just for the purpose of exacting a punitive remedy, but also toward enacting a vitally important preventive measure--one that may be the only available means by which to protect the country from the impending imposition of martial law at home as well as the declaration of war against Iran and possibly other countries in the Middle East."

While I think the martial law thing is ridiculous, Tornello does reflect the thinking of a fair number of people who just don’t happen to include most Democratic congressfolk.

I have argued against impeachment because it would be difficult to make an actionable case against Bush, although Cheney would be somewhat easier.

But the big reason is that I believe impeachment would be an e-fricking-normous distraction at a time when there are too many other fires to put out.

I'd like to hear suggestions from pro-impeachment folks about which of those fires they would leave burning in order to do the time-consuming work necessary to write, lobby for and vote on articles of impeachment.

What gets put aside or left behind? Have at it . . .
Posted by Shaun Mullen at 5:13 AM
Email ThisBlogThis!Share to TwitterShare to FacebookShare to Pinterest

Shaun, I have written about this several times. First I will share what I wrote just a week ago and on another comment I will identify some of the reasons I wrote they should be Impeached over a year ago. Here's the first:

Bill Moyers Journal on PBS today had Constitutional Lawyer extraordinaire, Bruce Fein, conservative, and John Nichols of The Nation, speaking on why we currently have a Constitutional crisis and the medicine is Impeachment of both President Bush and VP Cheney. This is must viewing and will challenge your current beliefs about the tool of Impeachment and why it is so important to Impeach both of them, not to punish them, but to ensure that the freedoms that they have taken from us, will not endure to future Presidents. The arguments are solid and will not offend Republicans nor Democrats who put country above politics. This is the best case ever made for Impeaching this President and VP.

A sample excerpt is below followed by a link to the video feed:

A public opinion poll from the American Research Group recently reported that more than four in ten Americans — 45% — favor impeachment hearings for President Bush and more than half — 54% — favored impeachment for Vice President Cheney.
Unhappiness about the war in Iraq isn't the only cause of the unsettled feelings of the electorate. Recent events like President Bush's pardoning of Scooter Libby, the refusal of Vice President Cheney's office to surrender emails under subpoena to Congress and the President's prohibition of testimony of former White House counsel Harriet E. Miers in front of the House Judiciary Committee have caused unease over claims of "executive privilege." In addition, many of the White House anti-terror initiatives and procedures — from the status of "enemy combatants" in Guantanamo to warrantless wiretapping — have come under legal scrutiny in Congress and the courts.

Bill Moyers gets perspective on the role of impeachment in American political life from Constitutional scholar Bruce Fein, who wrote the first article of impeachment against President Bill Clinton, and THE NATION's John Nichols, author of THE GENIUS OF IMPEACHMENT.

"The founding fathers expected an executive who tried to overreach and expected the executive would be hampered and curtailed by the legislative branch... They [Congress] have basically renounced — walked away from their responsibility to oversee and check." — Bruce Fein

"On January 20th, 2009, if George Bush and Dick Cheney are not appropriately held to account this Administration will hand off a toolbox with more powers than any President has ever had, more powers than the founders could have imagined. And that box may be handed to Hillary Clinton or it may be handed to Mitt Romney or Barack Obama or someone else. But whoever gets it, one of the things we know about power is that people don't give away the tools." — John Nichols.

My second post was written on April 22, 2006 and is titled High Crimes and Misdemeanors- Bush/Cheney? Here it is:

he question that will become front and center after the November 2006 elections and Democrats win back one of the Houses of Congress, will be whether the President and/or Vice President should be impeached. To understand this debate and before all the rhetoric begins, you will first need to understand what is an impeachable defense and what does the phrase "high crimes and misdemeanors" mean. Let's start by reading C-Span's historical answer regarding the definition of these terms as stated below:
Capitol Questions:
The Constitution says a President can be impeached for "high crimes and misdemeanors," but it doesn't define the term. Who decides what that means?

The Congress decides the definition: by majority vote in the House for impeachment, and by 2/3 vote in the Senate for conviction. The Framers of the Constitution deliberately put impeachment into the hands of the legislative branch rather than the judicial branch, thus transforming it from strictly a matter of legal definition to a matter of political judgment. Then Representative Gerald Ford put it into practical perspective in 1970, when he said an impeachable offense is "whatever a majority of the House of Representatives considers it to be at a given moment in history."

"High crimes and misdemeanors" entered the text of the Constitution due to George Mason and James Madison. Mason had argued that the reasons given for impeachment -- treason and bribery -- were not enough. He worried that other "great and dangerous offenses" might not be covered, and suggested adding the word "maladministration." Madison argued that term was too vague, so Mason then proposed "high crimes and misdemeanors," a phrase well-known in English common law. In 18th century language, a "misdemeanor" meant "mis-demeanor,"or bad behavior (neglect of duty and corruption were given as examples), while "high crimes" was roughly equivalent to "great offenses."

Lawyers and historians are still arguing about the exact meaning of "high crimes and misdemeanors," dividing into three schools of thought about the appropriate definition: (1) serious criminality evidenced by breaking existing law; (2) an abuse of office, and (3) the Alexander Hamilton standard (Federalist 65) of "violation of public trust."

In (one of) our most recent experience(s) with presidential impeachment -- Watergate in 1974 -- the House Judiciary Committee strongly argued that the case for impeachment need not be limited to actual violations of criminal law. In its report, Constitutional Grounds for Presidential Impeachment, the Committee argued the definition should go beyond actual breach of law, citing Blackstone's phrase, "an injury to the state or system of government," Justice Joseph Story's phrase, "offenses of a political character," and Edmund Burke's statement at an impeachment trial that the official on trial should be judged "not upon the niceties of a narrow jurisprudence, but upon the enlarged and solid principles of morality." The Committee further stated that historically, Congress had issued Articles of Impeachment in three broad categories: (1) exceeding the constitutional bounds of the powers of the office; (2) behaving in a manner grossly incompatible with the proper function and purpose of the office; and (3) employing the power of the office for an improper purpose or for personal gain.

Ok, let's examine if these offenses by our President and Vice President would warrant an impeachable offense:

1. Deliberately not enforcing Border Security with Mexico
2. Illegal wire-tapping of domestic telephone calls of Americans without authorization of the FISA Court and in deliberate evasiveness of the law imposed by Congress, even though Congress allowed for retroactive filing with the Court.
3. Review of the Torture Ban as agreed to in the Geneva Convention, looking for loopholes and authorizing the use of torture of prisoners and citizens of the United States held as "enemy combatants".
4. Authorization of the leaking of the name of a CIA operative for political reasons to stop dissent
5. Outsourcing Port Security to a Middle Eastern country
6. Failure to act with all the resources of the U.S. while being warned by the FEMA Director about a pending worse case scenario in the face hurricane Katrina and the levee breaches.
7. Cherry picking Intelligence to gain support for a planned war of choice in Iraq.
8. Giving massive tax breaks to the wealthiest Americans while increasing the National Debt to Trillions of dollars and bankrupting this Nation.
9. Changing the Rules for Enlisted service people to rely on a small clause to keep them indefinitely in the service, while reducing benefits for their families at home. All this while not listening to the advice of the military as to number of troops needed and no planning for an insurgency and no exit strategy.
10. Windfall profits for the Oil companies and the executives that manage them ($400 Million dollar bonus packages for Exxon CEO)
11. No bid contracts in the 10's of Billions of dollars to the former company where you were CEO and still obtain financial gains based upon the company's financial performance.

Or is this next one more serious crime than those above made by President Clinton?
-Lying about an embarrassing illicit affair he had as President, so that your family wouldn't find out nor would the country and lying under oath about it.

Every day that Bush/Cheney remain in power they take us further down the road to a third-world fascist banana republic. Literally nothing they do is positive and, as long as they remain, nothing positive is going to be done - about anything. So, if you want some of those fires you talk about to be put out, getting rid of Bush/Cheney will have to come first. Every day we wait is one more day wasted. Moreover, leaving them in power enables them to commit evil far beyond what they've already done. Think Iran.