Coming: The Helicopter Moment in Iraq 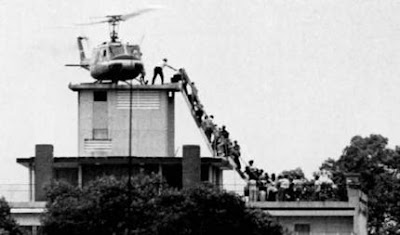 In the end, it is not our failure to learn from history that condemns us to repeat it, but our mind's turning away from even the briefest glimpse of what the dark passages of history were like that damns us. We may know, but we refuse to see. We blind our own mind's eye. It is our inability to imagine the most evil things that all men are capable of that corrupts us.
-- GERARD VAN DER LEUN

Stirring words, eh? And from one of the more thoughtful conservative bloggers around. But as Van der Leun raises his voice amidst the Greek chorus wailing that a U.S. retreat from a long and catastrophic Iraq war will result in . . . well, a long catastrophe, I cannot help but wonder what history books he is reading.

The answer, of course, is the books that George Bush would read if he wasn't such an intellectual chucklehead -- books that fit into the view that even if the Iraq war has not been entirely right and just, pulling out before the "job is done" in the view of the war drum beaters is wrong and unjust no matter the circumstances.

Van der Leun's musings at his American Digest include an ad hominem attack on the people who work for The New York Times that is distinctive for its sheer mean spiritedness. But the centerpiece de resistance of his justification for staying the course in Bush's Forever War, whatever the course is this week, is a lengthy digression into Nazi atrocities as historic antecedent for Iraq.

The two, of course, bear only tangential connection. Van der Leun would have done better to compare Iraq to . . . uh, well, there's no antecedent in the last 100 years to my knowledge.

Certainly not the Khmer Rogue killing fields, Rwanda, Bosnia-Herzegovina or the Rape of Nanking. But Hitler's Final Solution was unspeakably horrible -- the worst of the worst of the mass slaughters of the last century -- and is safe cover since pushbacks against a commentator using it as a loincloth can be attacked as . . . well, you know what they can be attacked as.

That so noted, Van der Leun and the other voices in the It's Too Late To Stop Now chorus have it exactly backwards:

It is George Bush who failed to grasp the lessons of history in starting the wrong war in the wrong place at the wrong time.

Everything must flow from this painful reality, including the need to begin thinking about how to ease the pain of the U.S.'s Helicopter Moment in Iraq, because with every passing week it looks increasingly likely there is going to be a bummer of a one.

The Helicopter Moment is the day that the last American trooper, an Iraqi manservant desperately clinging to a leg of his camo fatigues, scrambles aboad the last Blackhawk as it lifts off from the ruins of the American embassy compound in the mortar-cratered Green Zone.

What would be the consequences of staying indefinitelty as Van der Leun and the chorus advocate?

More of the same.

The same slog through the quicksand that is Iraq without nearly enough troops. As it is, the troops that are there are rotating back in country on their third and even fourth full tours.

Constantly shifting strategies in Washington to fit the political moment. This includes an the Alice in Wonderland post-surge plan now being floated to keep those Republican lemmings . . . er, senators from an outright dash to the sea.

And an intransigent Iraqi government that bites the hand that feeds it and has been unable to meet a single benchmark.

Van der Leun accuses people like myself who advocate an immediate commencement of a U.S. troop drawdown as opening the door to genocide (natch), but this is disingenous because what might happen will be different from what has been happening in what way?

Instead of 150 people being pulverized in a market bombing 200 might perish.

Instead of 1,500 Iraqis being killed by fellow Iraqis each month that 2,000 might die.

That instead of two million refugees there will be three million.

Instead of the Baghdad government waging a clandestine war within a war against Sunnis it will overtly do so by the light of day.

Instead of the insurgents playing Whack-a-Mole with those beleaguered U.S. forces, they'll have more freedom in going at each other's throats.

So the U.S. should stay in order to insure that the carnage continues at present levels? To piss even more American lives into the Iraqi desert wind?

Sorry, Mr. Van der Leun. There is no light at the end of this tunnel. None. Fini.

"a free agent who looks at the world as a magical, ever-changing buffet and sorts issues on a practical rather than an ideological basis."

I'd say your more intelligent friend needs to look up the meaning of ideological. So do you.

While a tad late coming to the table, the NYT did weigh in with a fairly telling editorial to which your "thoughtful" (don't you mean "shitful"?) right-wing blatherer reacted. AP ran a piece yesterday on how many MSM editorial pages are ever-so-belatedly coming around to a withdrawal stance, but questioning whether anybody listens to the MSM anymore.

Dan Schorr on NPR today read a letter from an unidentified first lt. in Kirkuk to his family in Va., asserting that the 3-mos. extension was the dealbreaker for many of his comrades ("Is there something about 365 days past which stress reaches the breaking point?") and detailing morale plummeting, GIs walking around with heads down, divorces and drug use skyrocketing, troops getting reassigned for everything from uniform infractions to executions of militants, a base mate blowing his head off with a shotgun. Can fragging be far behind? 'Copter moments indeed.

But McCain (and Lieberman) says it's all just getting peachier over there, so what does the lieutenant know? The churning effect on the GOP Congress right now grows more intriguing by the day. At what point do we have a team of the top echelon going to the White House to tell him the center won't hold anymore? And then, what follows? Cheney declaring, like Alexander Haig after Reagan took a bullet, "I'm in control here" ?

Yes, I fear that we are indeed approaching that Helicopter Moment. The Bush/Cheney/Rumsfeld gang spectacularly mismanaged the post-Saddam occupation & reconstruction of Iraq, the Sunni Arab "insurgents" succeeded in detonating a full-scale sectarian civil war in Arab Iraq ... and sometime between the summer and fall of 2006, the patience of the US public for maintaining a US presence in Iraq just snapped. Everything else is probably just details.

This is a tragic denouement, and contemplating the results is a bit terrifying. In this respect, I really do have to add one comment about a point you raise in your post. You say:

"Van der Leun accuses people like myself who advocate an immediate commencement of a U.S. troop drawdown as opening the door to genocide (natch), but this is disingenuous because what might happen will be different from what has been happening in what way?"

The answer is that it's likely to get much, much worse. That outcome may be inevitable (though I hope not), but at least we should face up to the prospect realistically.