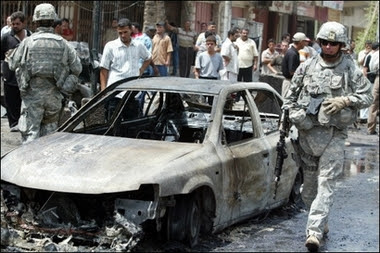 In a tacit admission that the political clock is outrunning the military clock in , the command has gone public with portions of an ambitious plan that assumes a major military presence well past the presidential election and into 2009.

While the plan, called the Joint Campaign Plan, is technically classified and does not specifically address troop levels or withdrawal schedules, the mere fact that it was shared with a New York Times reporter shows how concerned commanders, and presumably the White House, are that pubic and public support for the war has eroded severely. In the past, President Bush has refused to discuss the U.S.'s long-term involvement, saying that would be akin to signaling to the enemy its intentions.

According to the plan, which is an outgrowth of the surge strategy, the U.S.'s intentions center on finally making secure on the theory that this would give Iraqi political leaders the room they need to work toward political reconciliation between Shiites and Sunnis. Those efforts have been substantially stillborn since the onset of the civil war 18 months ago, while only small pockets of the capital have seen a reduction is violence.

"The goals in the document appear ambitious, given the immensity of the challenge of dealing with die-hard Sunni insurgents, renegade Shiite militias, Iraqi leaders who have made only fitful progress toward political reconciliation, as well as Iranian and Syrian neighbors who have not hesitated to interfere in ’s affairs. And the White House’s interim assessment of progress, issued n July 12, is mixed.

"But at a time when critics at home are defining patience in terms of weeks, the strategy may run into the expectations of many lawmakers for an early end to the American mission here."

The plan has two phases:

An "intermediate" phase with the goal of achieving improved nationwide security no later than June 2009.

Military officials are being careful not to guarantee success and told Gordon they recognized that the plan may need to be revised if assumptions were not met.

Good damned thing given the state of Iraq four-plus years after the invasion and the still insufficient number of troops to carry out any kind of strategy or plan. Given that reality, it is extremely difficult to imagine the same old assumptions -- chief among them that new life can be breathed into the corpse of a government -- playing out in the U.S.'s favor.

"The idea behind the surge was to bring stability and security to the Iraqi people, primarily in Baghdad because it is the political heart of the country, and by so doing give the Iraqis the time and space needed to come to grips with the tough issues they face and enable reconciliation to take place.

"If eventually the Iraqi government and the various sects and groups do not come to some sort of agreement on how to share power, on how to divide resources and on how to reconcile and stop the violence, then the assumption on which the surge strategy was based is invalid, and we would have to re-look the strategy."

The previous plan, which promoted the concept of the Iraqis taking more responsibility for security by reducing American forces, was widely viewed as a failure because Iraqis were unprepared to carry out expanded duties. As a consequence, sectarian killings spiked. They have only been somewhat reduced since the surge began earlier this year.

Photograph by Agence France Presse
Posted by Shaun Mullen at 5:59 AM
Email ThisBlogThis!Share to TwitterShare to FacebookShare to Pinterest