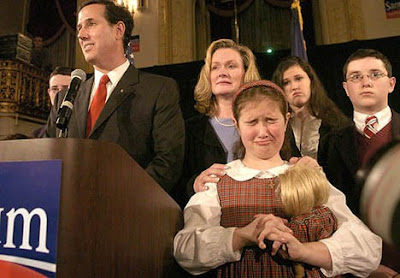 Since the state of put Rick Santorum on waivers and nobody picked up his option, Rick has been feeling a little bitter about the whole experience. But it's not like he can go back to his former place of work and shoot up the place; expressing his displeasure by hunting down the 2,357,058 bosses who decided that the state wanted to "go in a different direction" and then asked him to clear out his locker. So now he sits at home all day in his underwear and calls into daytime talk radio shows ("Hi. This is Rick, First time caller, long time listener . . . ") and rages against the dying of his career and how he's going to get those bastards.

Admit it: when George W. Bush is gone, you're going to miss him. Who else would politicize the surgeon general's office? Who else would embed junk science into a mostly ceremonial post? And who else could turn a congressional hearing into strengthening that sinecure into an exploration of political corruption?

There are many disturbing aspects to the Bush Administration that historians will examine and perhaps, if they are charitable, chalk up to an overreaction to the 9/11 attacks or perhaps a zealotry for securing the from another, bigger catastrophe.

But there is one facet of the Bush Presidency that historians will universally and roundly condemn; the politicization of governance that, top to bottom, has interfered with many of the vital functions we expect the government to carry out. From the office of the Attorney General, to the Environmental Protection Agency, to NASA, to the National Park Service and more, politics has intruded into what traditionally has been non-political or apolitical functions of government. Science issues seem to be a favorite target of the Bushies for political massaging but other important government operations have also seen the heavy hand of politics interfere with public policy decisions – decisions that affect the health, safety, and security of the American people.

I will say to my Republican friends that it does no good to whine about double standards. You’re going to have to concede the hypocrisy point to our Democratic friends on this one. If your going to lecture people about the sanctity of marriage as it relates to banning gay unions or campaign on a platform stressing “family values,” it would be best if you didn’t go whoring around on your wife, wetting your wick at $300 a pop.

For many, the past eight years have been a disheartening display of McCain’s willingness to sacrifice his credentials in order to please the Republican elite. The edge that McCain once brought – a willingness to take on corporate corruption, lobbyist influence, and the charlatans of the Evangelical movement — has been dulled by a complacency in being a Bush sycophant, willing to suck down the fumes from a disastrous war, an exceedingly unpopular immigration policy, and economically hobbling tax cuts while Bush speeds away from Pennsylvania Avenue. In essence, the media darling turned into another Bush crony, willing to stoop to new and unnecessary lows in a vain attempt to jockey to be the next Commander in Chief. The McCain implosion is one of his own doing, the consequence of doing business in and misreading the Bush orthodoxy as the key to the White House.

Though it is very magnanimous of [Senator David] Vitter to accept responsibility for his transgressions, is he really to blame? After the left redefined marriage, it must have been a very difficult and confusing time for him. The failure of the passage of the Federal Marriage Amendment must have taken a severe toll on him as he struggled to figure out what marriage really is if even gays can do it. As he grappled with the issue, is it any surprise that he found solace in the embrace of a disinterested paid companion?

The has described the Protestant and Orthodox faiths as "not proper Churches" in a document issued with the full authority of the Pope.

Anglican leaders reacted with dismay, accusing the Roman Catholic Church of paradoxical behaviour. They said that the new 16-page document outlining the "defects" of non-Catholic churches constituted a major obstacle to ecumenism.

RUSSELL, Pa. — Careers at stake with each swing, baseball players leave little to sport when it comes to their bats. They weigh them. They count their grains. They talk to them.

But in towns like this one, in the heart of the mountain forests that supply the nation’s finest baseball bats, the future of the ash tree is in doubt because of a killer beetle and a warming climate, and with it, the complicated relationship of the baseball player to his bat.

Of all the magical powers wielded by Harry Potter, perhaps none has cast a stronger spell than his supposed ability to transform the reading habits of young people. In what has become near mythology about the wildly popular series by J. K. Rowling, many parents, teachers, librarians and booksellers have credited it with inspiring a generation of kids to read for pleasure in a world dominated by instant messaging and music downloads.

And so it has, for many children. But in keeping with the intricately plotted novels themselves, the truth about Harry Potter and reading is not quite so straightforward a success story. Indeed, as the series draws to a much-lamented close, federal statistics show that the percentage of youngsters who read for fun continues to drop significantly as children get older, at almost exactly the same rate as before Harry Potter came along.

Let's hope that Michael Chertoff's "gut feeling" that something bad might happen this summer is just the result of something he ate.