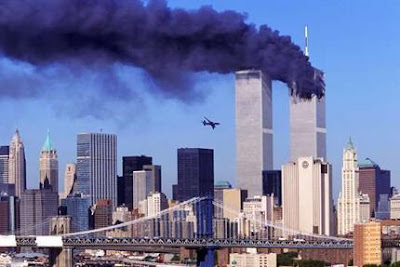 Ask yourself this simple question:

Nearly six years after the attacks on the World Trade Center and Pentagon, do you feel safer?

No. Of course you don't.

There are two interrelated reasons for this state of affairs: Terrorists in the 21st century are fiendishly adept at recruiting and adapting, while the Bush administration's War on Terror has been a failure.

I am inclined to say that the latter doesn’t much matter because at the end of the day it is the former that counts the most, but that is a cop out.

As it is, the White House has been asserting for years (and President Bush won re-election by claiming) that much of Al Qaeda’s leadership had been killed or captured and invading would reduce the terrorist threat.

Both assertions are demonstratively false and can be traced back to a single event.

Osama bin Laden and many of his key lieutenants remain at large and are comfortably ensconced in the mountainous border region of western Pakistan, while the Iraq war has been gasoline on the fire of the Islamic jihad by breeding a whole new generation of terrorists.

In perhaps the most outrageous turn of events in a presidential tenure littered with bad judgments, the fires at the World Trade Center were still burning when the decision was made not to throw the full weight of America’s might at the Al Qaeda leadership but to instead go after Saddam Hussein, a brutal dictator who had long been in the neocon crosshairs but had only the most tangential connection to the Islamic jihad.

The folly of that decision is on full display in a declassified 800-word summary of the latest National Intelligence Estimate.

The new estimate does note that several terror plots against the have been disrupted because of increased vigilance and countermeasures, but the landscape looks starkly similar to the pre-9/11 world, about as profound a rebuke by the administration's own analysts of the Bush bluster that he has made us safer.

A perversely absurd consequence of the president's fear mongering is that his defenders are now arguing that a terrorist threat that he himself created justifies staying the course in Iraq.

While the intelligence estimate does not address the situation in the homeland, it is just as screwed up because politics has been put ahead of safety. Sound familiar?

Under the original scheme, homeland security funds were equally distributed among all states, including crucibles of terrorism like , which happens to be our carpetbagging vice president's adopted state.

This mischief resulted in Wyoming getting $37.74 in anti-terror dough per capita, which meant that every caribou could be issued a biohazard suit, while the Northwest Arctic Borough, an area in Alaska inhabited by 7,300 people, spent $233,000 (or $31.91 per capita) to buy decontamination tents, night vision goggles and other equipment. got a measly $5.41 per capita, leaving some of its most pressing needs underfunded or not funded at all.

Then last year, DHS announced that it would evaluate requests for funding based less on, er . . . politics and more on where terrorists are likely to strike. Unfortunately, the change was driven less by common sense than a shortfall in funding because of . . . (drum roll please!) the war in Iraq.

The president has appointed an appalling rogues gallery of political hacks and other partisans to key homeland security posts. (Recall that his first choice for the job now held by Michael "I've Got a Feeling in My Gut" Chernoff was the mobbed-up Bernard Kerik.)

The administration has been so lackadaisical about homeland security that it has failed to fill about a quarter of the top leadership posts at Chernoff's shop, creating a "gaping hole" in the nation's preparedness for a terrorist attack, according to a congressional report.

Along with a compliant Congress, the White House has repeatedly bowed to powerful benefactors in the ports, chemical, rail transport and other key industries in backing away from homeland security reforms.

With Vice President Cheney's son-in-law leading the charge, the chemical industry has resisted all efforts to protect U.S. chemical plants against attacks, and a compliant White House and Congress has rolled over and let industry lobbyists scratch their tummies.


As The New York Times notes:

The message, as always: Be very afraid. And don’t question the president.

Posted by Shaun Mullen at 7:22 AM
Email ThisBlogThis!Share to TwitterShare to FacebookShare to Pinterest

If you take away America's descrete borders, i.e. two side bounded by oceans and and two with heavily scrutinized international arrivals in Canada and Mexico, the U.S.A. would be awash in terror events.
Our partners in thumping Iraq for Neocon nationalism should today be be safer if, as the White House propaganda crowdstates, that that invasion has truly reduced world wide terrorism.
Not even close: Spain paid the price and the U.K. more than has its handsful with plots metasticizing in answer to Bush's folly.
To repeat the logic: If America were attached to Europe or Asia we would be in deep doodoo.
Bush, Cheney et al derve zero credit for reducing Homeland plots or attacks.
They deserve all the blame for increased recruitment of terrorists and planned attacks on our allies.
(postscript: France and Germany rationally chose not to invade Iraq and have avoided the consequences unfolding in the U.K. They chose not to breach international law and good sense and they are safer. Those who invaded, especially America are less safe and for many, many generations to come.)