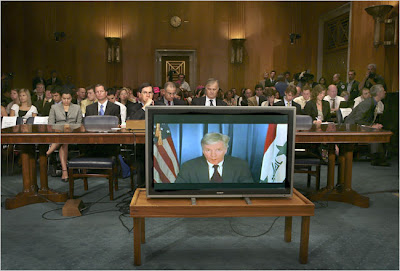 Lt. Gen. Ray Odierno, deputy commander in , is saying he needs until at least November - another full half Friedman - to assess whether the surge is working.

. . . And by November it will be January, as all the while the cheerleading Right urge everyone to "give the military a chance" after four years. It's called running out the clock.

The top commanders in and the American ambassador to appealed for more time beyond their mid-September assessment to more fully judge if the new strategy was making gains.

. . .But their appeals, in three videoconferences on Capitol Hill and at the Pentagon, were met by stern rebukes from lawmakers of both parties.

It can certainly be argued that Harry Reid’s Democrats look like losers, because they have failed yet again to find a way to put the brakes on President Bush’s war strategy. Stuck with their slim majority, the Democrats were able to coax only a handful of Republicans to side with them on the key procedural issue . . .

But the political shorthand is damaging for the GOP. In essence, Bush’s enablers have again defied the will of the American landslide majority.

I deeply resent the administration's continuing effort to impugn the patriotism of those of us who are asking hard questions.

Looking back over a quarter of a century of chronicling current affairs, I cannot recall a more comprehensive and avoidable man-made disaster.

Seven of the most important Sunni-led insurgent organisations fighting the U.S. occupation in Iraq have agreed to form a public political alliance with the aim of preparing for negotiations in advance of an American withdrawal.

For more than a year, the leader of one the most notorious insurgent groups in was said to be a mysterious Iraqi called Abu Omar al-Baghdadi. . . . The chief military spokesman (has) provided a new explanation for Mr. Baghdadi’s ability to escape attack: he never existed.

After months of lying low, the anti-American Shiite cleric Moktada al-Sadr has re-emerged with a shrewd strategy that reaches out to Iraqis on the street while distancing himself from the increasingly unpopular government.

"I am Shiite," Ali said. "My uncles and cousins were murdered by Saddam's regime. I wanted desperately to get rid of him. But today, if Saddam's feet appeared in front of me, I would fall to my knees and kiss them!"

Bush doesn't want the troops to have a larger raise, he thinks the money could be better spend in other ways to support the troops. If we thought that would translate into better armor, shorter tours or better medical help when they got back to the states, it might be considered acceptable. But hey, Congress got their extra $4400 a year so they will probably give in on this issue just like they continue to do on withdrawing troops from . Support those troops! But it has to be some other time because it is important that we continue further down the path to destruction before we wake up and realize that there is nothing left to support.

Pentagon officials said that they were asking Congress to use $1.2 billion this year to build nearly 4,000 armored trucks designed to withstand roadside bomb attacks, a move that follows Congressional criticism that the Defense Department has been too slow to buy enough of the vehicles for troops in .

U.S. officials are mapping out new options of how to deal with what appears to be the gravest threat facing the United States: the resurgence of al Qaeda in Pakistan.

Finally someone says the glaringly obvious about what we have to do to prevent terrorist attacks here: Stop wringing our hands about Musharraf’s shaky situation in and cross the border to take out bin Laden’s people who are dug in there.

Lee Hamilton, 76 years old with no political ambitions, said it straight out on CNN yesterday: "If there's anything we should have learned, it's that we must not let Al Qaeda have a sanctuary, which they certainly do in Pakistan today."