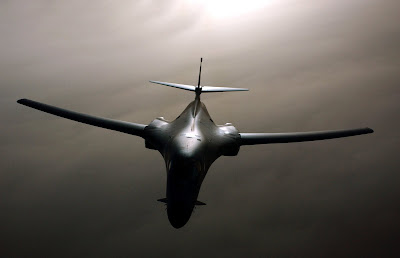 B-1 BOMBER RETURNS FROM MISSION OVER IRAQ

Away from the headlines and debate over the "surge'' in U.S. ground troops, the Air Force has quietly built up its hardware inside Iraq, sharply stepped up bombing and laid a foundation for a sustained air campaign in support of American and Iraqi forces.

Squadrons of attack planes have been added to the in-country fleet. The air reconnaissance arm has almost doubled since last year. The powerful B1-B bomber has been recalled to action over .

The escalation worries some about an increase in "collateral damage,'' casualties among Iraqi civilians. Air Force generals worry about wear and tear on aging aircraft. But ground commanders clearly like what they see.

Although Bush administration officials have frequently lashed out at Syria and Iran, accusing it of helping insurgents and militias here, the largest number of foreign fighters and suicide bombers in Iraq come from a third neighbor, Saudi Arabia, according to a senior U.S. military officer and Iraqi lawmakers.

I suppose I'll merely expose myself to harmless ridicule if I make the following assertion: George W. Bush's presidency will probably be a successful one.

Let's step back from the unnecessary mistakes and the self-inflicted wounds that have characterized the Bush administration. Let's look at the broad forest rather than the often unlovely trees. What do we see? First, no second terrorist attack on soil -- not something we could have taken for granted. Second, a strong economy -- also something that wasn't inevitable.

And third, and most important, a war in Iraq that has been very difficult, but where -- despite some confusion engendered by an almost meaningless "benchmark" report last week -- we now seem to be on course to a successful outcome.

After the Iraq Study Group report was released last December, offering a blueprint for changing course in , it rocketed to the top of bestseller lists and more than 1.5 million copies were downloaded from the Internet. But the reader who mattered most, President Bush, quickly shelved it.

Now, with the Bush administration’s own assessment showing limited progress in Iraq and an increasingly exasperated Congress once again debating the future of the war, a growing number of senators from both parties are making a new push to adopt the study group’s recommendations into law.

[Bush’s crimes are more] worrisome than ’s because he is seeking more institutionally to cripple checks and balances and the authority of Congress and the judiciary to superintend his assertions of power. He has claimed the authority to tell Congress they don’t have any right to know what he’s doing with relation to spying on American citizens, using that information in any way that he wants in contradiction to a federal statute called the Foreign Intelligence Surveillance Act. He’s claimed authority to say he can kidnap people, throw them into dungeons abroad, dump them out into without any political or legal accountability. These are standards that are totally anathema to a democratic society devoted to the rule of law.

Locusts whistled and crickets chirped in the searing heat as Lady Bird Johnson was buried in a ceremony that recognized her life as a first lady, a conservationist, and a grandmother.

In the middle of a 2004 interview with an Irish TV journalist, President Bush, denying that he is swayed by popular opinion, said, "My job is to do my job." This reminded me of a line I sometimes heard from U.S. officials in Iraq, usually in public affairs, when an unpleasant subject like sectarian violence or the electricity shortage came up: "It is what it is." Such tautological assertions have become a useful currency of discourse in the Bush Administration. They refuse to engage or make an argument; instead, they are designed to foreclose any possibility of debate. They imply that talk of causation or complication is for wimps. They convey a spirit of tough-minded realism while managing to say nothing at all. They are at the same time no-nonsense and nonsensical. Like the gangster language of Nixon and his men on the Watergate tapes ("the big enchilada"), or the long-winded exegeses of Clinton and his flacks ("It depends on what the meaning of the word 'is' is"), they express the mental atmosphere that seeps out of the Oval Office, pervades Washington, and eventually characterizes an entire government. When I think back on the Bush years, I will remember "It is what it is" as a linguistic marker of intellectual emptiness, and my chief demand of the next Administration will be: Substantive predicates!

I wish the Iranian people well and I only hope their experience with an inept, rigid idealogue president goes better than ours.

A day after agreeing to a record $660 million settlement with 508 victims of sexual abuse by members of the clergy in the Archdiocese of Los Angeles, Cardinal Roger Mahony apologized to the victims for "this terrible sin and crime" and said he hoped the settlement would bring a "“final resolution.

Four years of legal combat ended in a settlement agreement late Saturday, just two days before the scheduled start of a trial in which Cardinal Mahony would have been required to testify.

The settlement is the largest in any Roman Catholic diocese, amounting to about $1.3 million per victim. The Catholic Church in the United States has so far paid more than $2 billion in settlements and legal judgments to victims of sexual abuse and their families.

One by one, Marshall McLuhan's wackiest-seeming predictions come true. Forty years ago, he said that modern communications technology would turn the young into tribal primitives who pay attention not to objective "news" reports but only to what the drums say, i.e., rumors.

And there you have blogs. The universe of blogs is a universe of rumors, and the tribe likes it that way.

Internet radio programmers who warned that a dispute over royalties could cause the death of their medium have received a stay.

A substantial increase in the royalties that online stations must pay for playing music was set to take effect Sunday. But amid an outcry from online listeners and Congressional pressure, representatives for the recording industry indicated this week that they might not demand all the payments called for under the new royalty program, which was established in March by the federal Copyright Royalty Board.