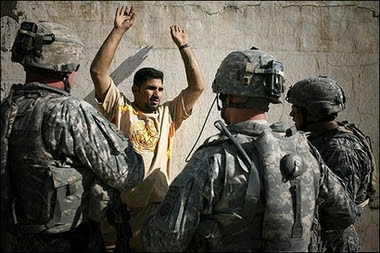 A New York Times op-ed piece this week by Michael E. O’Hanlon and Kenneth M. Pollack stating that the U.S. is finally making progress militarily in Iraq has gotten enormous coverage – and deservedly so.

I offer two overarching and interrelated observations pertaining to it:

First, the response to the piece by the Brookings Institution braniacs puts the lie to the notion flogged by conservatives and right-wingers that many liberal and left-wing commentators want the to be humiliated in .

While there is always the lunatic fringe, this assessment couldn’t be more wrong.

As someone who initially supported the war, I believe that I speak for many people in saying that I feel great enmity for President Bush and his harem of dangerous hacks – Cheney, Rove, Gonzo and Condi come easily to mind, and Rummy and Wolfie will not be soon forgotten. My heart breaks anew with every American death in , which easily is the most disastrous foreign policy blunder in history.

These harsh views do not translate into wishing ill for the troops. Quite the contrary. Which is why I briefly felt a surge (pardon the term) of optimism as I read the O’Hanlon-Pollack piece.

But that feeling quickly passed because, secondly and ultimately most importantly, the piece exhibited a rather shocking myopia.

While there does seem to be some movement on the battlefield, that situation is not playing out in an hermetically sealed environment, and there was but one passing reference in the entire piece to the other major conflict in Iraq – a deeply dysfunctional central government obdurately unwilling to work for sectarian reconciliation.

As even General Petraeus, the architect of the modest battlefield successes, has said, there cannot be a military victory without a political victory. The former remains highly unlikely; there is zero chance of the latter.

Photograph by Agence France Presse
Posted by Shaun Mullen at 5:31 AM
Email ThisBlogThis!Share to TwitterShare to FacebookShare to Pinterest

General Petraeus and More Dying to do in Iraq
.
The Sunni insurgents are a viable fighting force numbering in the tens of thousands. At no point in our lifetime will they be defeated.
Therefore political accommodations may be made to install peace in Iraq, but there is categorically no 'victory' available.
The enemy we set out to defeat, the forces of Saddam and the Baathists, are still viable and present on the battlefield. We have backed new governing forces, which already reek of Baathist misconduct and which also must accommodate the insurgents politically to survive. There is no victory ever to be had in Iraq.
That the dominant American political civilian overseers (Bush / Cheney / neocons) lack both desire for and any visible skill in negotiating makes the difficult simply impossible.
A sincere best of luck to Gen. Petraeus.

As you say Shaun there is a "notion flogged by conservatives and right-wingers that many liberal and left-wing commentators want the U.S. to be humiliated in Iraq."

As to whether the U.S. will be humiliated in Iraq, well guess what, that ship has sailed.

One fact, that there are now, thousands of foreign Al Quaeda sympathizers in Iraq using our troops for target practice and political fodder, when there were none pre-invasion, is in itself a surfeit of humiliation.

An orderly withdrawal is the only way to cease the humiliation.

The fact that there are conservatives calling for more war, more torture, more illegal death and mayhem, that wrong headed jabbering is actually more of a continuing national humiliation.