What's the Party of Lincoln To Do? 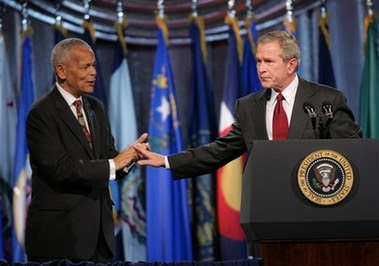 QUICK! SOMEBODY GET A NET!

I’d like to revisit the matter of why the Republican Party continues to marginalize blacks and generally treats all people of color as second-class citizens. (The ones that are citizens, that is.)


In responses to a cross-post yesterday at The Moderate Voice on the news that only Tom Tancredo of the nine Republican president wannabes appeared at an NAACP candidate forum, a number of commenters, all presumably Republicans, sought to deflect that criticism. Some noted that the NAACP was not exactly a welcoming group (true enough), one nattered that blacks were not worth reaching out to (insulting in the extreme), and there was the inevitable tired canard that the issue is about politics and not race (nice try, but no cigar).

My interest here is less to bash the GOP for its decades’ long indifference to anyone who is not a white Christian with an American flag tattooed on their ass. That’s like shooting fish in a barrel.

No, my interest is in what a political party that has worked assiduously to marginalize itself through electing and blindly supporting a dangerously inept president with a white-bread agenda can try to do to bring back a relic from the party's proud past called The Big Tent, which has fallen into the Republican Memory Hole along with all those congressional golfing junkets with Jack Abramoff.

Or is that task hopeless? Should the Party of Lincoln continue to automatically concede large chunks of the electorate in major elections?
Posted by Shaun Mullen at 6:18 AM
Email ThisBlogThis!Share to TwitterShare to FacebookShare to Pinterest

Of course the Republicans have to ignore the black vote. The cost of gaining a single black vote is the alienation of large numbers of conservative white votes.

The Republicans face a problems that the Democratic Party does not. If the Republicans screw over part of their supporters, those supporters stay home or vote them out of office. Democrats can screw over black voters all they want and not lose a single vote (see the immigration issue).

The Democratic Party can appeal to soccer moms without losing black or hispanic votes. When Repubicans appeal to blacks, all they do is lose white male voters.

I agree with Superdestroyer, that the Republican Party's courtship of the white male vote is a specifically designed strategy.

In spite of that, I have a feeling--call it a hunch--that some white men go out of their way to vote for Democrats.