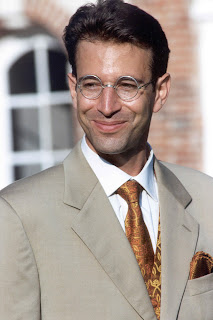 The media melodrama is over. Apparently enough of the Bancroft family will accept Rupert Murdoch’s $5 billion Faustian bargain for the Wall Street Journal.

But give them credit for a struggle to save their souls. At a family meeting Monday night, the Journal reported, one of the matriarchs, 77-year-old Jane Cox MacElree, argued against making the deal with the Devil by invoking the martyrdom of Daniel Pearl (photo).

"He put his life on the line for the paper," Ms. MacElree said, citing the reporter who was kidnapped and killed by Al Qaeda in Pakistan.

The U.S. Air Force plans to deliver its newest and deadliest unmanned aircraft, the Reaper, to the theater of operations in Afghanistan.

As American troop levels are peaking in , British force levels are heading in the opposite direction as the troops prepare to withdraw completely from the city center of , 300 miles to the south.

. . . The scaling down by ’s largest coalition partner foreshadows many of the political and military challenges certain to face American commanders when their troops begin withdrawing.

Skepticism is widespread in , as in , about whether Iraqi forces are ready to take over. The British and the Americans will have to assuage the fears of Iraqis that they are being abandoned to gunmen and religious extremists. And each is likely to face intensified attacks from propaganda-conscious enemies trying to claim credit for driving out the Westerners.

Joe Biden’s so-called soft-partition plan, which calls for dividing Iraq into three semi-autonomous regions, seems to be gaining support as the best way out of a bad situation.

Cindy Sheehan, when all is said and done, is a sympathetic and pathetic figure.

The best diagnostic clues (to George Bush’s chauvinism) may come from the Freedom of Information Act. I have been reading de-classified documents from the CIA about this week. The docs reach back to before the time Saddam murdered his way into power . . .

We have reached a point where there is no such thing as a slow news week. It would be very easy to have spent the whole week paying attention to nothing more than Gonzovision and the escalating tension between Congress and the Bush Administration over subpoenas and such. But if you did that you would have missed the Senate calling for universal internet filtering and the House actually passing a Farm Bill that the President will likely veto . . . You would have missed the President asking for an overhaul of the FISA statute that he can't even be bothered to follow. And that's just the news from Capitol Hill!

Before the stupid gets too far out of hand, let us note one thing. There is a substantive difference between bloggers working with parties in regards to advocacy and pursuing electoral issues, and an administration issuing talking points to bloggers to assist in blocking investigations into alleged criminal wrongdoings.

Really, this isn’t rocket science. I have no problem with bloggers organizing and meeting with the RNC and the DNC and whoever else to pursue legitimate political goals. I frown on bloggers coordinating to engage in spin brigades to cover-up alleged wrongdoings. Pretending they are the same thing is hack-fu (to borrow a term) of the first order.

A funny thing is happening in American politics: The fiercest battle is no longer between the left and the right but between partisanship and bipartisanship. The Bush administration, which has been notorious for playing to its hard-right base, has started reaching across the aisle.

Republican presidential candidate Rudy Giuliani called Democrats "the party of losers" for demanding a scheduled pullout of troops from .

"Democrats have already declared we’ve lost," the former mayor said during a campaign stop in . "It’s really strange. The Democrats want to give our enemies a timetable. Never in history of war has a retreating army been asked to give a timetable.

"I’m for victory," Giuliani said. Democrats, he added, are "living in a world where they refuse to admit the existence of Islamic terrorism."


Cairo-based Heba Kotb tackles questions on desire, orgasms, vibrators and more — within the framework of Islam.

-- JEFFREY FLEISCHMAN
[Y]ou know, Al Gore's not going to be rounding up Jews and exterminating them. It is the same tactic, however. The goal is different. The goal is globalization. The goal is global carbon tax. The goal is the United Nations running the world. That is the goal. Back in the 1930s, the goal was get rid of all of the Jews and have one global government.

The notion that Charlie Chaplin is putting on a show as he snoozes on the Hemingway Home and Museum veranda — well, that's enough to make a cat laugh.

But neither the fluffy feline, named for the Little Tramp because of his tuxedo-like markings, nor his 46 companions lazing around the late author's estate are likely to be amused if the U.S. government succeeds in designating them an animal act and restricts their freedom.

-- CAROL J. WILLIAMS
You can fix a game, dope an athlete, bet on a dog’s carcass. But can you kill sports?