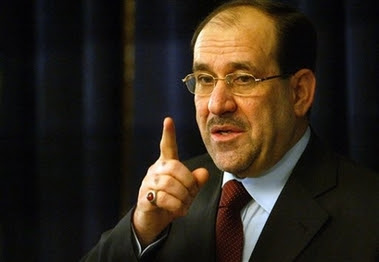 Coming hard on the heels of the reports that the Iraqi army remains unprepared to take over security of the war-torn country, Prime Minister Nouri al-Maliki says his forces are capable and American troops can troops can leave "anytime they want."

Sounds good to me. Where's the door?

In another valentine to , one of Al-Maliki’s top aides accused the of embarrassing the Iraqi government by violating human rights and treating his country like an "experiment in a lab."

"Particularly since the political process is facing security, economic and services pressures, as well as regional and international interference."

But he said that if necessary, Iraqi police and soldiers could fill the void left by the departure of coalition forces:

"We say in full confidence that we are able, God willing, to take the responsibility completely in running the security file if the international forces withdraw at anytime they want."

In a progress the report mandated by Congress as a preliminary analysis of the success of President Bush's latest strategy, the Iraqi government got satisfactory marks on military and security matters, but it is an open secret that efforts to train up Iraqi soldiers have lagged because of the focus on the surge strategy and at most only two brigades are fully operational, the same number as a year ago.

Meanwhile, one of Al-Maliki's close advisers, Shiite lawmaker Hassan al-Suneid, bristled over the American pressure, telling The Associated Press that:

"The situation looks as if it is an experiment in an American laboratory [judging] whether we succeed or fail."

He sharply criticized the military, saying it was committing human rights violations and embarrassing the Iraqi government through such tactics as building a wall around a Sunni neighborhood in , making nice with Sunni tribes in Anbar and Diyala provinces, and launching repeated raids on suspected Shiite militiamen in the slum.

This blogger has taken the 18 U.S.-imposed benchmarks and applied them to the good old US of A. While his conclusions certainly are subjective, you should not be shocked to known that we’re not doing as well as those Aye-Rackis. Click here for a snout full.

Photograph by The Associated Press
Posted by Shaun Mullen at 6:26 AM
Email ThisBlogThis!Share to TwitterShare to FacebookShare to Pinterest

A trouble making blogger with too much free time took a look at the benchmarks yesterday. He applied these standards to the United States. It turns out that Iraq is doing better than we are at meeting these goals.

Bravissimo! I have put up a link at the end of this post and cross-linked at The Moderate Voice, where you'll probably get your share of shrill scolding from the right-of-center trolls.