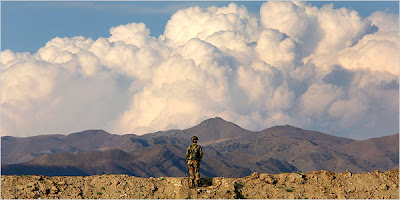 In identifying the main reasons for Al Qaeda’s resurgence, intelligence officials and White House aides pointed the finger squarely at a hands-off approach toward the tribal areas by ’s president, Gen. Pervez Musharraf, who last year brokered a cease-fire with tribal leaders in an effort to drain support for Islamic extremism in the region.

American officials make little secret of their skepticism that General Musharraf has the capability to be effective in the mountainous territory along the Afghan border, where his troops have been bloodied before by a mix of Qaeda leaders and tribes that view the territory as their own, not part of Pakistan.

Any lawyer will tell you, if you’re negotiating a contract and the other side thinks you’ll never walk away, you’ve got no leverage. And in , we’ve never had any leverage. The Iraqis believe that Mr. Bush will never walk away, so they have no incentive to make painful compromises.

With their sleeping cots and general disarray, Senate Democrats are evoking images of protests past against an unresponsive government. Granted that demonstrations of old were not by elected officials, the symbolism is familiar.

. . . The dramatic difference this time is that anger and frustration are directed, not against the government, but by one branch of the power structure against another. Only a President with the insensitivity and arrogance of George W. Bush could have driven the Congress of the to such expression of enraged impotence. Even Herbert Hoover was incapable of that.

If the Democrats want an end to the war, then let them use the one power the Constitution gives them to do so: defund the war. They don't want to take responsibility for the catastrophe that will follow in its wake, however, so they continue to conduct publicity stunts like this slumber party and offer unconstitutional legislation that Bush is certain to veto. Harry Reid can't even figure out how to surrender properly.

They have seen the folly of our course in . The mission, they understand, cannot be accomplished. The Iraqi government, they discern, is hopelessly sectarian.

In wisdom, they are paragons. In action, they are nullities.

With President Bush’s popularity scraping bottom in opinion polls, with U.S. casualties rising in Iraq in a force surge that has stretched tours to 15 months, the Bush administration has said it "strongly opposes" key military pay and benefit gains tossed into the fiscal 2008 defense bill.

. . . Like the House, senators favor a 3.5 percent military pay raise for 2008 versus the administration’s proposed 3 percent to match private sector wage growth as measured by the government’s Employment Cost Index or ECI. The White House calls the extra half percentage point unnecessary and notes that basic pay has jumped by 33 percent since 2001. The added cost of the bigger raise, $2.2 billion through 2013, is money "that would otherwise be available to support our troops," said the OMB letter.

I think that many people are tired of the bitterness and partisanship of the Bush era. My main point, however, is that people over-estimate the extent to which this bitterness and partisanship is due to George Bush himself. My prediction is that we will see further bitterness in the years ahead, as the sore losers of 2000 and 2004 become the sore winners of 2008. In 2012, there will still be Islamic terrorism, millions of Americans will lack health insurance and America's health care bill will still be unusually high, the rich will still be getting richer (unless the economy tanks), and the trend will be for more people to join the Long Tail that identifies with neither political party. Which is why both parties are becoming more shrill every year.

Even as News Corp. negotiated to buy Dow Jones & Co. over the past few weeks, a grim reality was increasingly evident to executives on both sides of the discussion: The downturn in the newspaper industry is getting worse.

Last fall, newspaper executives and analysts were caught by surprise by the severity of a slump that took hold last summer. Since the beginning of this year, the rate of decline in advertising revenue has accelerated. Total print and online ad revenue was down 4.8% to $10.6 billion in the first quarter from a year earlier, according to the Newspaper Association of America, compared with its full-year decline in 2006 of 0.3%.