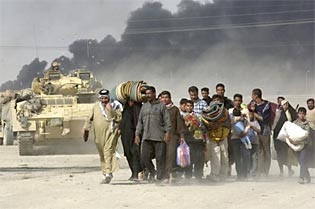 Things aren’t likely to get betting under Iraqi refugee legislation being considered by the Greatest Deliberative Body on Earth.

This, explains George Packer at Interesting Times, his new New Yorker blog, is because of problems with an amendment.

That amendment designates Christians and other religious minorities as a special category of persecuted peoples, expediting their resettlement in the , but it is being opposed by the Department of Homeland Insecurity because those peoples might include A-Rabs, of which most Iraqis, as well as terrorists, of course are.

"[I]f we can no longer distinguish between Al Qaeda operatives and Iraqis who have risked their lives for the U.S. over a period of years, then we are already helpless to protect ourselves against terrorists. If admitting Muslims is a threat to our body politic, then our social fabric is already too weak to be mended. If the shame of allowing our Iraqi friends to be slaughtered before the eyes of the world is worth whatever security benefits might come from keeping them out, then we have already abandoned our leadership role and should simply tell our allies to stop counting on us."


* * * * *
Pretty amazing that even the New Yorker now has a blog. ("Welcome to the dark side," jokes longtime blogger Matthew Ygeslias). And even better than the inestimable Packard is at the helm.

If you're not suffering from Iraq burnout, I'd recommend Packard's The Assassins' Gate: America in Iraq, which for my ducats is one of the very best books on the war.