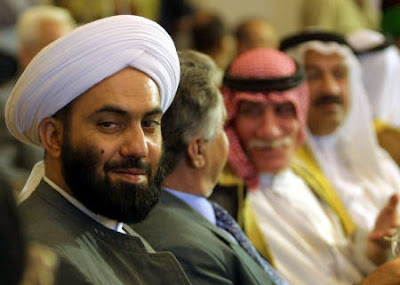 It’s official. The Iraqi parliament is going to take August off even though it has just eight weeks to show progress on those pesky Bush administration-imposed benchmarks.

"My understanding is at this juncture they're going to take August off, but, you know, they may change their minds.

Snow did not comment on what the temperatures might be at Marine Corps firebases in Anbar Province or the neuro injury ward at the main Army hospital in the Green Zone.

Usually being pretty quick with an opinion, I kinda find myself at a loss about this development.

To begin with, the Iraqi Parliament is a marginally functional institution at best. It has trouble mustering a quorum, is the target of suicide bomb attacks and notable for stage-managed walkouts and sectarian-driven boycotts.

In fact, it actually makes the U.S. Congress look pretty good, and that is no mean feat.

I'm not sure what these parliamentarians would be doing over the summer since they don't seem to do a whole lot the rest of the year. And the American model of the congressional summer recess – legislator goes home to bond with constituents, raise campaign dough and hang out at the country club pool – doesn’t seem to fit.

Besides which, according to the Iraqi constitution, the parliament has two sessions a year of four months each, although it can extend each session for up to one month.

Snow, in what might have been an unintentional lapse into candor, added that he believed that "progress can be made” even if the parliament is not in session."

By the by, the U.S. Congress will be in recess from August 3 to September 4.
Posted by Shaun Mullen at 5:17 AM
Email ThisBlogThis!Share to TwitterShare to FacebookShare to Pinterest

I agree. They haven't been able to get much done-too many factions with too many agendas. 130 degrees wouldn't help, so let them take the month off.

They're probably arranging their own affairs and positioning themselves politically for our withdrawal. I don't imagine they feel very secure about their current jobs.