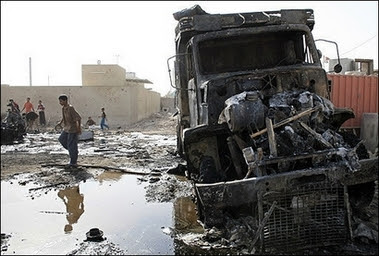 Truck destroyed in airstrike on Sadr City in Baghdad

It . . . seems to me, alas, that when the president speaks spontaneously about the war, he reveals vast amounts of ignorance, denial and deception, self and otherwise. The patronizing soundbites stick in the craw at this point. His formulation that we do not know whether the war can succeed but that it nonetheless must succeed is about as disorienting a leadership call as I have heard. The rank condescension toward the American people is also staggering. Look, Mr President, most Americans aren't as dim as you seem to be. Maybe it's time you realized that.

He's just out of his depth, I'm afraid. And others are sinking - and dying - as a consequence.

[T]he surge has always been considered a way to gain enough breathing room to allow the Iraqi government to start pursuing the necessary political reforms for reconciliation. The report, not surprisingly, assesses the Iraqis as having made little progress towards those benchmarks. This could result in a suspension of non-military aid to the central Iraqi government as a penalty for not taking the reforms demanded by the US seriously.

More likely, the Bush administration will give the Iraqis a pass on this first benchmark test -- but Congress will probably not give the White House a pass on it.

Moderation and centrism are normally the right instincts in American politics, and many lawmakers in both parties desperately want to find a workable middle ground on Iraq. But while the politics are right, the military logic is not.

Right now, all the talk in DC is whether there has been any progress in Iraq. No one can wait till September. They need to know now. Primarily, it appears, because they need to kill the war for their own domestic political reasons before it kills them.

So while there is some progress to report, it is confined to one area, one nationality and one conflict among many in this war. We are still trying to referee a civil war in a broken state, and I don't think we could change that dynamic with several million troops, let alone 120,000.

You speak of my party wanting to "choose defeat," while yours wants "victory." Is that stark opposition truly our only choice? Or has your party painted itself into a rhetorical corner with its polarized talk of victory and defeat? Isn't it possible that you have created a nightmare of words from which we cannot wake up? I don't regard the prudent preservation of American lives and treasure as a "defeat" but rather as a sensible acknowledgment of the reality principle. Not all of our desires, hopes, and ideals can come to pass. That is the human condition.

In an astonishing heist, guards at a [Baghdad] bank made off with more than a quarter-billion dollars on Wednesday, according to an official at the Interior Ministry.

The robbery, of $282 million from the Dar Es Salaam bank, a private financial institution, raised more questions than it answered, and officials were tight-lipped about the crime. The local police said two guards engineered the robbery, but an official at the Interior Ministry said three guards were involved.

Both confirmed that the stolen money was in American dollars, not Iraqi dinars. It was unclear why the bank had that much money on hand in dollars, or how the robbers managed to move such a large amount without being detected.

The weather in is painfully hot. And the constant struggle with daily life logistics is depleting by energy reserves.

I tried so many times to hold a pen or touch the keyboard but I couldn't finish even one coherent paragraph although there's no lack of ideas or events…it's frustrating but, I'm trying to force myself to accept it because there are still two more months to go before the annual visit of hell to Baghdad ends.

These months have been the worst in electricity supplies ever. We're getting an average of one hour per day of electricity from the grid. The last time we had such hour was three days ago! And I assume some of you are familiar now with what it takes to maintain those small generators we use at home.

Posted by Shaun Mullen at 4:47 AM
Email ThisBlogThis!Share to TwitterShare to FacebookShare to Pinterest