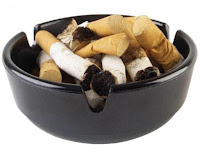 My plan was to try to go one whole day without sticking another fork in the corpse of the Bush presidency. Not that writing about dead pets is preferable, but I am so sick of the antics at the White House.

And then the president goes and does something so despicable that he knocks me off my game:

“President Bush yesterday rejected entreaties by his Republican allies that he compromise with Democrats on legislation to renew a popular program that provides health coverage to poor children, saying that expanding the program would enlarge the role of the federal government at the expense of private insurance.”

The children would be covered by an increase in the federal tax on cigarettes.

Several things come to mind when thinking about the supposed connection between taxing cigarettes and children's health care:
(1) With everyone saying cigarettes cause cancer, why is it legal to sell them?
(2) What joker dreamed up the ironic idea to connect notoriously unhealthy cigarettes and maintaing children's health?
(3) Why in the world does it require taxing cigarettes in order to provide health care for children?
(4) Why didn't we have to tax cigarettes to have a preemptive war and occupation of the middle east? and
(5) Why didn't Bush have his rectum examined at Walter Reed?

Yes, why does it require taxing cigarettes to provide health care?

Smokers already pay high taxes; why dump on them even more? Those tobacco settlements were justified by tobacco users health costs, yet the money went to everything but those health costs, including tax reductions.