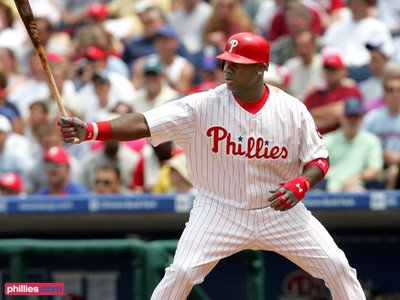 When not wearing a hair shirt or flogging myself with a cat o' nine tails, I root for the Philadelphia Phillies.

An explanation is due non-baseball fans and Kiko's House visitors from foreign climes: The Phillies have lost 9,995 games, more than any franchise in any American sport, and have been to the World Series only four times in the club's 123-year history. They have won only a single World Championsip.

It gets worse: The 1961 Phillies hold the modern major league record of 23 consecutive defeats, while the 1964 Phillies suffered an historic late-season collapse, blowing a lead that stood at 6½ games with 12 games remaining and nearly sending my parents, both long-suffering fans, to the loony bin.

The Phillies have not reached the playoffs since 1993, but may be on the verge of claiming the National League wild card spot, which is awarded the second-place team with the record in the league's three divisions at the end of the regular season on Sunday night.

The 2006 Phillies have Ryan Howard (photo) and several other stars, as well as a great intangible -- gutsiness -- that has enabled them to remain competitive. This despite the fact that their general manager and many fans all but wrote them off at mid-season.

What makes this fall different is that there is a feeling even among perennially pessimistic Phillies fans that the team can make the post season, and that takes gutsiness.

WHAT COLLEGE FOOTBALL IS ALL ABOUT
I will not be watching baseball on Saturday night. The DF&C and I will make the walk from Kiko's House to the football stadium where the Fighting Blue Hens take on the No. 1-ranked before yet another sellout crowd.

This showdown is a bit of a role reversal. is more accustomed to being the top-ranked team nationally in its division, having won six national championships, most recently in 2003. But has built a potent offense around two of the finest players that I've ever seen in the flesh -- Quarterback Ricky Santos and wide receiver David Ball.

Ball has scored an extraordinary 50 touchdowns in his college career and is poised to break the college record of former 49ers star Jerry Rice.

The Wildcats are the favorites, but the Hens also have that great intangible and an upset is possible.

The game will be televised on CN8 Television in the Mid-Atlantic region and ESPN2 is expected to cut away to Delaware Stadium if Ball breaks Rice's record.

Look for us: We're in Section C, Row EE.
Posted by Shaun Mullen at 4:31 AM
Email ThisBlogThis!Share to TwitterShare to FacebookShare to Pinterest

I enjoy your blog! Since you are a UD fan, I thought you might be interested in my UD Sports writings. If so, they are here: