On Beyond 'The Lord of the Rings' 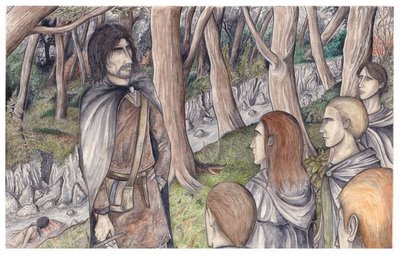 J.R.R. Tolkien's "The Children of Hurin," an epic tale which he begin in 1918, worked on throughout his life, but left uncompleted upon his death in 1973, will be published in the spring of 2007.

Fans of Tolkien, author of "The Hobbit" and "The Lord of the Rings," assumed that "Hurin" would remain unfinished, but his son, Christopher, reconstructed the book based on the many drafts that his father left.

“It has seemed to me for a long time that there was a good case for presenting my father’s long version of the legend of the `Children of Hurin’ as an independent work, between its own covers."

Excerpts of the book, which include Tolkien's familiar elves and dwarves, have been published previously. "Hurin" will be published by Houghton Mifflin in the U.S. and HarperCollins in England.

(Illustration of "The Children of Hurin" by Peter Xavier Price)
Posted by Shaun Mullen at 3:55 AM
Email ThisBlogThis!Share to TwitterShare to FacebookShare to Pinterest