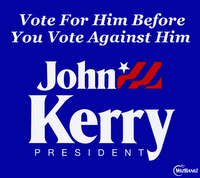 I'm tired of picking on John Kerry. It's just too easy. So for the time being, let's consider him a work in progress.

This slight change of heart is prompted by yet another speech that the former (and I hope not future) presidential candidate has given that he wished he'd given in 2004 when the stakes were just a wee bit higher.

Last month Kerry belatedly -- as in 21 months latedly -- alleged that there were voting irregularities in Ohio on Election Day 2004 election that handed George Bush 20 electoral votes and the keys to the White House. Mr. Whimp, of course, never contested the results when it mattered.

Now Kerry has called in a speech for a new national commitment to reduce the number of abortions, which certainly is a praiseworthy goal.

Never mind Ohio. The deeply divisive issue of abortion helped tip the 2004 election to Bush because he was out front about Republican values in an election in which the GOP relentlessly beat that drum, while Mr. Whimp never could figure out, let alone articulate what Democratic values, let alone his own, were.

More here on the speech.

Let's get this straight: Kerry ran the worst presidential campaign since Michael Dukakis in 1988 and gave the election to Bush, who by most rights should have lost, because of his inability to find a message, let alone stay on it. There is nothing to suggest that anything will be different in 2008 if the Democrats decide to commit hari kerri and nominate him.