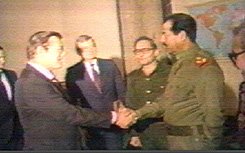 A bunch of people apparently have not forgetten Rummy's infamous December 1983 ass kiss in Baghdad. The Wall Street Journal reports that the single most-download file at George Washington University’s National Security Archive are a once-classified batch of documents, photos and a video documenting Rumsfeld’s infamous handshake and meeting with Saddam.

'HE WOULD FIRE THE NEXT PERSON WHO SAID THAT'
Rumsfeld will never be able to wash the blood off his hands, of course, but in a stunning interview with a small Virginia newspaper, one of the Pentagon's chief strategists says that the defense secretary forbade him from developing plans for securing a post-war Iraq.

The Daily Press of Hampton Roads, Virginia, says in an article based on an interview with retiring Brigadier General Mark Scheid that:


"The secretary of defense continued to push on us . . . that everything we write in our plan has to be the idea that we are going to go in, we're going to take out the regime, and then we're going to leave. We won't stay."

Scheid said the planners continued to try "to write what was called Phase 4," or the piece of the plan that included post-invasion operations like occupation.

Even if the troops didn't stay, "at least we have to plan for it," Scheid said.

"I remember the secretary of defense saying that he would fire the next person that said that," Scheid said. "We would not do planning for Phase 4 operations, which would require all those additional troops that people talk about today.

"He said we will not do that because the American public will not back us if they think we are going over there for a long war."

(Hat tip to the Volokh Conspiracy.)
Posted by Shaun Mullen at 5:17 AM
Email ThisBlogThis!Share to TwitterShare to FacebookShare to Pinterest