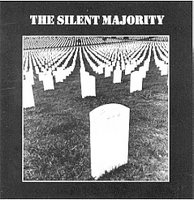 "What could prove to be the most important factor in the 2006 elections is overlooked because it is unseen: The Republicans cannot try to curry favor with a "silent majority" that favors the Iraq war because a majority of Americans, both vocal and quiet, have come to see the war as a mistake.

"President Bush's defenders have cast opponents of the war as weak on terrorism. . . . . Vice President Cheney accused Democrats of 'resignation and defeatism.' But the charges have not taken hold, because most Americans don't agree with the premise linking the war on terror with the war in Iraq. . . .

"That is why news over the weekend of a National Intelligence Estimate on Iraq is especially troublesome for Republican electoral chances. By finding that the war in Iraq has encouraged global terrorism and spawned a new generation of Islamic radicals, the report by 16 government intelligence services undercuts the administration's central argument that the Iraq war has made the United States safer.

"During the 2002 election campaign -- before the war had actually begun -- Democratic candidates all over the country fled the Iraq debate and feared raising any questions about Bush's national security choices. In 2006 it's the administration trying to keep Iraq out of the campaign and to move the public conversation to anything else as an alternative to an accounting for its war decisions that so many middle-of-the-road Americans now regret. There is no silent majority to bail the president out."

Posted by Shaun Mullen at 3:15 AM
Email ThisBlogThis!Share to TwitterShare to FacebookShare to Pinterest