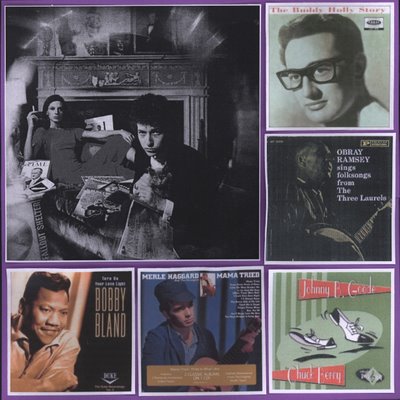 Many a Grateful Dead fan will swear that all of the band's better known songs are originals. In fact, a fair number of them are covers of the music of great American singer-songwriters.

John Barlow, who penned the lyrics to most of Grateful Dead rhythm guitarist Bob Weir's songs, tells a hilarious but instructive story that plays to that notion:

One time during the early nineties when Bobby and I hadn't written anything for a while, I was at a concert at Shoreline [Amphitheater in Mountain View, California] and a freshly minted young Deadhead came up to me in the audience. He was about sixteen, and I expect some older, more experienced Deadhead had pointed me out to him.

"Hey," he said. "I really like that new song you wrote for Bobby." I cocked an eyebrow, sorry that there was no such thing.

"The one about the watchtowers and stuff." I gritted my teeth in a moment of involuntary humility.

"I wish I could tell you I wrote that song, but I didn't."

"Who's Bob Dylan? he asked.

This was a great moment for me. I realized, as I should have known all along, that if the song is any good, it detaches from its apparent source and enters into the hearts and minds of those who hear it to make its own home there, leaving behind everyone except for, say, the person you were making love with the first time you heard it.

It is in that spirit that the Kiko's House Disk Picks for September focuses on six eminently detachable songs from albums by six American greats whom the Dead covered -- Obray Ramsey, Merle Haggard, Bobby "Blue Bland, Chuck Berry, Buddy Holly and Bob Dylan. In each case the Dead did not necessarily make the song better, but did make it distinctively their own.

All but the Ramsey and Blue Bland albums are still in print, although the Haggard album was only recently reissued. Some are available on the cheap, albeit in used condition, from the usual online retail suspects.

FOLKSONGS FROM THE THREE LAURELS
(Obray Ramsey)
Ramsey is a singer and banjo player from North Carolina whose 15 minutes of fame coincided with the 1960s folk revival. He recorded this album in 1963. It includes "Cold Rain and Snow," a tale of betrayal and redemption recorded by the Dead on their 1967 big-label album debut, "The Grateful Dead." It was part of the Dead's live repertoire on and off for nearly 30 years.
MAMA TRIED
(Merle Haggard)
Haggard, an early innovator of the Bakerfield Sound (as in Bakersfield, California) emerged from prison in the early 1960s to help introduce electric guitar to country music. The Dead recorded the title track -- a great number from the Haggard stable of songs about hard drinking and betrayal -- on the 1971 "Grateful Dead (Skull and Roses)" album and it remained in their concert rotation until the end.

TURN ON YOUR LOVELIGHT
(Bobby "Blue" Bland)
Bland's hallmark as a blues singer was a coarse, guttoral vocal style. He first recorded the incendiary "Turn On Your Lovelight," which is about exactly what the title connotes, on this 1961 album. It was covered to spectacular effect by the Dead on its classic 1969 "Live Dead" album and was the signature song of Ron "Pigpen" McKernan, their first keyboard player and a great bluesman in his own right.

JOHNNY B. GOODE
(Chuck Berry)
Berry has cast an appropriately long shadow over four decades of rock 'n' roll as a great guitarist and songwriter. He recorded "New Jet to the Promised Land" on a slew of albums, including this 2001 best hits compliation. The Dead first recorded "Promised Land," a coast-to-coast traveling song, on a 1976 live album, "Steal Your Face," and performed it frequently through the 1970s as a show opener. "Promised Land" contains one of the most famous telephone numbers in the rock repertoire -- "Tidewater four ten oh nine."
THE BUDDY HOLLY STORY
Texas-born Holly turned from bluegrass to rock 'n' roll after hearing Elvis Presley and was one of its earliest and greatest progenitors. He recorded "Not Fade Away" -- a hard rocking love song -- on this legendary 1959 album released shortly after his death in a plane crash. The Dead covered "NFA," as Deadheads called it, on the 1971 "Grateful Dead (Skull and Roses)" album. The Dead always performed it in tandem with "Going' Down the Road Feeling Bad," often as an encore medley, in shows from 1971 until Jerry Garcia's death in 1995.
BRINGING IT ALL BACK HOME
(Bob Dylan)
The Dead and especially Garcia's side bands covered many Dylan songs, including "When I Paint My Masterpiece," "Knockin' On Heaven's Door" and "Simple Twist of Fate," but "Baby Blue," a break-up song from the bard's classic 1965 album, is an appropriate pick. That is because the Dead recorded it on "The Grateful Dead," their only pre-Warner Brothers album in 1966 and a long out-of-print collectors item. They performed "Baby Blue" live on and off for four decades, in later years as an encore.
PREVIOUS KIKO'S HOUSE DISK PICKS