Iraq: The Final Chapter in the Battle For Baghdad 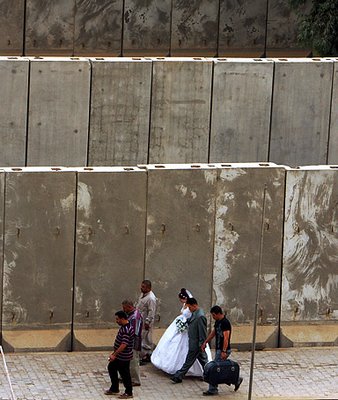 I’ve spoken of the shining city all my political life . . . in my mind it was a tall, proud city built on rocks stronger than oceans, windswept, God-blessed, and teeming with people of all kinds living in harmony and peace; a city with free ports that hummed with commerce and creativity. And if there had to be city walls, the walls had doors and the doors were open to anyone with the will and heart to get there.
-- Ronald Reagan

The plan to seal off Baghdad by ringing it with trenches and traffic checkpoints is the final chapter in the battle for the capital -- if not for all of Iraq.

Coming three and a half years after a feckless President Bush stood on the deck of an aircraft carrier and declared "Mission Accomplished" even as an underplanned and ultimately botched occupation already was beginning its long unraveling, the wall-and-checkpoint plan is a last gasp effort to try to pull victory from the jaws of defeat.

There is no good news coming out of Iraq unless you believe that a shaky agreement cobbled together on Sunday by tribes in Anbar Province to unite against insurgants will last. (I don't.) Or you are molified by the cooked statistics for the number of Iraq civilians killed that are being put out by the U.S. command. (By its Orwellian calculus, there has been a drastic reduction since a second major security sweep got underway, but that is because it no longer counts victims of bombings and rocket and mortar attacks.)

The tragedy of the plan is that it is just one more sign that the life is being choked out of a once vibrant city of four million people.

I also question whether a city with a circumference of 60 miles can really be sealed off. The insurgents are nothing if not clever.

Checkpoints did not work during the first security sweep, and with so much terrain it is likely that insurgents will find areas where they can slip in and out. Furthermore, the plan calls for 28 checkpoints -- a recipe for gridlock -- leaving motorists snarled in traffic who will be sitting ducks for attacks.

There is a desperation behind the plan reminiscent of when the U.S. military resorted to using Agent Orange, a cancer-causing herbicide, in Vietnam.

A network of trenches and roadblocks would seem to have nothing to do with a defoliant, but the objective of the plan is the same as using Agent Orange, which was to deny the cover provided by jungle-like forests and deny food to the people living in those forests.

In other words, to lay bare the social fabric of Baghdad without distinguishing between the vast majority of people who just want to live life and the small minority who want to take life.

THE WAR ON IRAQ
The Dear Friend & Conscience asked me an unpleasant but intriguing question:

When did the United States declare war on Iraq?

I unconvincingly explained that the U.S. never actually declared war on Iraq per se, merely the Saddam Hussein regime. The DF&C then asked why the focus of the war subduing, capturing and killing Iraqs, the very people whom the U.S. supposedly is liberating and democratizing?

This sent me back to a timeline for the war and a search for the (tipping) point where there was a discernible a shift from rooting out the last elements of Saddam's regime, his army and the Feyadeen to bloody confrontations with Iraqis themselves.

That, I believe, would be the First Battle of Fallujah in the spring of 2004, a year after The Decider declared "Mission Accomplished."

The insurgents won that battle against a large Marine force and kept control of the key city in western An embarrassed White House then pretended that the battle hadn't happened until after the 2004 presidential election when the Second Battle of Fallujah was fought with a larger combined Marine-Army force.

The U.S prevailed, but control of Fallujah is again slipping away and the head of Marine intelligence in Iraq said last week that Anbar was all but lost unless -- and perhaps even if -- a division-sized force of 10,000-12,000 was deployed there to reinforce the 30,000 troops already in place. He later was forced by the Pentagon to retract his statement.

(Photograph by David Guttenfelder/The Associated Press)
Posted by Shaun Mullen at 3:29 AM
Email ThisBlogThis!Share to TwitterShare to FacebookShare to Pinterest

Good stuff about the Orwellian reality of our current situation - of course, after we invaded, we made damn sure the oil ministry was secured instead of doing the same thing to the munitions dumps such as those at al Qaqaa numbering about 100 throughout Iraq; they were looted and, as a result, our people have been getting killed and wounded left and right with the IEDs created from the materials that were stolen (Rudy Giuliani, of course, blames our troops for that - what "courage" from "America's Mayor").