Iraq I: Troop Levels & 'The Struggle for Civilization' 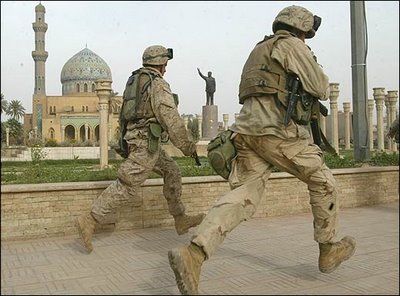 If the war on terror is really the "struggle for civilization" that President Bush asserted it is in his prime-time TV address this week, then why are there only 130,000 troops (*) in Iraq, the same number at the outset of the invasion three and a half years ago, despite the fact things have gone steadily downhill since then?

That is a mere quarter of the number requested by Pentagon logisticians before their-pre invasion plans were eviscerated by Defense Secretary Rumsfeld, and has long been evident, are not been nearly enough to rout terrorists, tamp down warring sectarian militias and, in short, save the enormous country from itself.

Publicly, military commanders say they have enough troops and use phrases like "economy of force," which is a dead giveaway that they're hurting. Privately, they say that they need double or triple the number of troops.

CNN correspondent Michael Ware did not pull any punches in a report this week from Ramadi in Anbar Province, noting that:

"[S]ince the inception of this war, we have seen Al Qaeda global jihad introduced to a country where it never exists. And like a cancer, once one cell appears, it begins to metastasize.

"So what we have seen throughout the country, but particularly in Ramadi, is Al Qaeda, through its money, its motivation, its tactic, its ideology, hijack the local fight. So in Ramadi, it's actually the Al Qaeda front line.

"Al Qaeda dominates all the other groups so effectively that it is in charge. So, this is where American Marines and soldiers go face to face every day with the very organization that attacked the World Trade Center and the Pentagon, and yet it seems that they're being forced to do so under-resourced and with one arm tied behind their back."

Are you listening, Mr. Decider in Chief?

William Kristol and Rich Lowry, editors of the conservative Weekly Standard and National Review, are listening.

They argue in a strangely myopic Washington Post op-ed piece that the U.S. is at a "crucial moment in Iraq" and the downward slide can only be checked by sending beaucoup additional troops and securing Baghdad for once and for all:

"More U.S. troops in Iraq would improve our chances of winning a decisive battle at a decisive moment. This means the ability to succeed in Iraq is, to some significant degree, within our control. The president should therefore order a substantial surge in overall troop levels in Iraq, with the additional forces focused on securing Baghdad."

* The dynamic duo is vague on how many more troops are needed other than saying "substantially more."

* As is abundantly clear, the focus on Baghdad during a U.S.-Iraq security sweep in June and a second sweep now a month old has emboldened insurgents in outlying provinces.

Confirming what CNN's Wade reported, the Marine Corps' top intelligence guru all but conceded this week that Anbar, Iraq's largest province, is lost with insurgents holding all of the cities and the border with Syria and Jordan more porous as ever. That is, unless another division -- 10,000 to 15,000 troops -- is deployed ASAP.

He has now been forced to downplay his grim assessment. Of course.

* Kristol and Lowry say that the Bush administration emphasizes that there needs to be a political, not merely a military, solution in Iraq, but stops short of stating the obvious:

With increasing talk of dividing the country into sectarian enclaves like the Kuridsh north, a political solution is even more remote than winning on the battlefield.

* For President Bush to tell Rumsfeld to send more troops to Iraq would be an admission that the defense secretary's concept of war-on-the-cheap has been a failure.

Furthermore, it would underscore the spurious linkage between the war and 9/11 attacks. Not only is there no link, but as Wade noted the war in Iraq has opened a previously nonexistent front for Islamic militants.

* Finally, they fail to acknowledge the 800-pound gorilla in the room -- a mid-term election in which their soul mates, the Republican Party, stand a chance of losing the House and an outside chance of losing the Senate, as well, because voters have finally caught on that the administration's justifications for the war are a crock.

Republican incumbents are campaigning for their political lives across America, and no matter how wretched the situation may be in Iraq, sending more troops -- as opposed to promising to begin bringing them home -- would be suicide.

Speaking of failure to acknowledge, Lowry fails to note that until very recently he was among the most strident Bush apologists and insisted that The Decider and Rummy knew best.

So, in just five short months in Rich Lowry World, we went from "The debate over troop levels" is "somewhat beside the point" and "to think that higher troop levels would have been a magic bullet is to indulge a very American faith in the power of mass to overcome anything" to "There is no mystery as to what can make the crucial difference in the battle of Baghdad: American troops" and "The bottom line is this: More U.S. troops in Iraq would improve our chances of winning a decisive battle at a decisive moment." It's not just profoundly wrong; it's worse than that. It's ludicrous.

Meanwhile, Lawrence Korb, an assistant secretary of defense in the Reagan administration, and Peter Ogden, a colleague at the Center for American Progress, rebut Kristol and Lowry in another WaPo op-ed piece and suggest that the conservatives' article should have been titled "Reinforcing Failure."

BASICALLY DISTURBING
Beyond the troop level mess in Iraq, there are disturbing questions about the quality of recruits. In fact, in all likelihood there simply aren't any more combat-ready troops to send to Iraq even if the White House capitulated.

The New Republic does not paint a pretty picture in an article on the state of the military:

After failing to meet its recruitment target for 2005, the Army raised the maximum age for enlistment from 35 to 40 in January — only to find it necessary to raise it to 42 in June. Basic training, which has, for decades, been an important tool for testing the mettle of recruits, has increasingly become a rubber-stamping ritual. Through the first six months of 2006, only 7.6 percent of new recruits failed basic training, down from 18.1 percent in May 2005.

Alarmingly, this drop in boot camp attrition coincides with a lowering of recruitment standards. The number of Army recruits who scored below average on its aptitude test doubled in 2005, and the Army has doubled the number of non-high school graduates it can enlist this year.

Then there are man-boys like Steven Green. Remember him?


Major General Udi Adam, who commanded Israel’s forces in Lebanon, has resigned after widespread criticism over how political and military leaders had handled the war.

Adam, who headed the Northern Command, was the first Israeli official to quit over the war. With politicians, the news media and the public calling for an inquiry into how the war was carried out, the government is expected to approve one.

Can you imagine any of this happening in the U.S.? Of course not.

(*) While 130,000 is the official number of U.S. troops in-country, 144,000 is more accurate. Why the discrepancy? I haven't a clue -- unless the Pentagon is intentionally lowballing the number for political reasons.

(Hat tip to Kevin Drum at The Washington Monthly for the New Republic article.)

Posted by Shaun Mullen at 3:43 AM
Email ThisBlogThis!Share to TwitterShare to FacebookShare to Pinterest