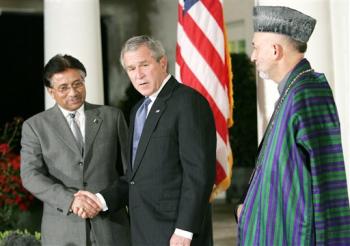 Has there ever been a stranger visit of a foreign dignitary to the than the just completed whirlwind tour of Pakistani President Pervez Musharraf?

In between hob-nobbing with President Bush and other Washington glitterati, Musharraf stopped by the “Daily Show” and chatted up Jon Stewart (he was tres vivant) and in a “60 Minutes” interview dropped a nugget from his new book, which a gossip columnist of my acquaintance would call a memwow, as opposed to a memoir.

Two days after 9/11, Deputy Secretary of State Richard Armitage told Musharraf that if he didn’t cooperate in finding Osama bin Laden, the U.S. would bomb his country back to the Stone Age.

Bush did his part by getting, uh . . . hopelessly confused.

The president then reversed field when later asked on the steps of the White House what he would do if OBL was found to be in . He responded that he “absolutely” would order air strikes, which apparently meant that had been stripped of its sovereignty in a few short days.

The president shook hands with both leaders during the photo op, but Karzai kept his distance from Musharraf because Afghanistan, which was nearly bombed back to the Stone Age first by the Soviets when it was a soverign nation and then by the U.S. when it wasn't, is mad at Pakistan.

Musharraf is heading back home with a wallet full of book royalties but not, as he had hoped, a bunch of American F-16 fighter planes.

It turns out that the was going to sell him the F-16s without an electronic warfare system that would allow pilots to detect any and all aircraft. The system that Musharraf's air force would get would allow only detection of non-NATO aircraft such as and .

Christopher Brauchli does a good job of making sense of all this at The Human Race and Other Sports. It's also a great looking blog.
Posted by Shaun Mullen at 4:36 AM
Email ThisBlogThis!Share to TwitterShare to FacebookShare to Pinterest