Gratuitous Kitty Shots of the Week 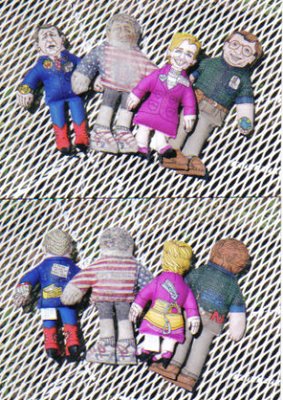 The humans have a tradition at Kiko's House of giving the kitties catnip toys each Christmas holiday season.

This began in 1997 when Panda and Kimba were gifted a Bill Clinton. He took quite a beating during the Monica Lewinsky scandal and impeachment trial. As you can see, he is the worse for wear nearly nine years later, but remains a favorite.

In 2000, the kitties found the just elected George Bush under the Christmas tree. Panda had passed on, but Dubya was an immediate favorite of Kiko's and although he may disappear behind a dresser or under a bed for weeks at a time, she eventually seeks him out when he does something especially naughty and gives him a well deserved drubbing.

Having survived the Millennium computer scare, Bill Gates arrived in 2002, although it's the humans who feel like kicking him around when one of his miserable Microsoft products hangs up.

Hillary Clinton came on the scene in 2004. Kiko will make arrangements with the dolls, or "groupings" as the DF&C calls them. More often than not, Hillary will be on top of Bill, or at least cover his privates with her hand.

* * * * *
Would you like your kitty or kitties to be world famous? Send us a photo in the form of a jpg to kikokimba@gmail.com and we'll make that happen.