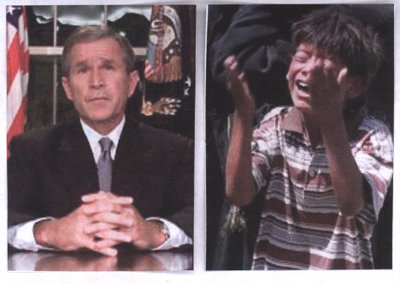 There were an average of 15 violent deaths a day in Baghdad, a city of 4 million people, prior to the 2003 invasion. On Wednesday alone, over 100 people were killed or found dead.

This is not to suggest that the quality of life was better in the capital with a megalomaniac running the country.

Yes, Saddam was a very bad man and deserved to get his ass kicked, but despite having three and a half years to do right by the burghers of Baghdad, the U.S. has allowed the city to descend into unimaginable barbarity. Yes, the blood of Baghdad is on George Bush's hands.

* At least 27 people killed in attacks on police patrols, including a car bombing that killed 12 traffic cops and wounded 13 others. When a crowd gathered to help the wounded, another bomb detonated, killing seven civilians and wounding 47 others.

* A U.S. soldier killed after a bomb struck his vehicle.

'A QUINTESSENTIAL BAGHDAD MOMENT'
Washington Post correpsondent Sudarsan Ragavan provides a chilling first-person account of the barbarity, which includes the police themselves.

"As an angry crowd gathered Tuesday morning, the young man stepped out of a gray Mercedes poised for battle. Across Abu Nawas Street, his tin-roofed shop lay crumpled like a run-over trash can. He knew whom to blame.

"'Stop,' a policeman yelled as the man got back in his car and sped away. Another policeman fired a shot in his direction. Moments later, white pickup trucks brimming with men in blue police uniforms and black bulletproof vests sped up the street and screeched to a halt in front of a small kiosk. Some wore black masks.

"They jumped out and began firing AK-47 assault rifles. Bullets flew toward the sky and down the street, sending dozens of bystanders, including women and children, scrambling for cover. The gunfire reached a jackhammer pitch.

"Crouched behind a white car, Razak Haider, whose relatives were watching their shops get leveled, voiced a question on many minds: 'How can we accept this shooting? There are families and children here.'

"It was a quintessential Baghdad moment, the sort that happens to hundreds of people here every week. And each moment opens a window onto the forces that plague Iraq.

"Whether one is driving on a quiet street or stuck in a traffic jam, chaos can erupt in nanoseconds. One day it may be a suicide bomber; another day, a roadside explosive. It could even be a mortar shell, a missile -- or an army of policemen with guns blazing."


Every big city neighborhood has a colorful character who eeks out a modest living while boasting that better days are ahead. Zappy tells the story of one such person at his Baghdad blog, Where Date Palms Grow:

"Nearly every shopkeeper in the “Karada Dakhel – Aboklaam & Attar Street” Area know who Rasool is.

He’s a Young ignorant skinny Individual with many talents, he started as a shoeshine boy and was persistently dirty and ragged, his main goal in life was to get over a failed marriage and Marry again, during my acquaintance to him he used to beg for either a Cigarette or a 250 Iraqi Dinar Bill (approx 10 cents) telling us “Brooh Oobook” (on your Fathers soul” give me a 250. When we used to make fun of him and throw a shoe at him he used to throw it back on our heads and spit on us. When it was lunch time he was the first to join us for lunch. When he finishes he curses us and leaves. But that’s Rasool.

"One day he told us that when he arrives to and becomes the Ambassador there he would call us and laughs and spit on us.

"He eventually did marry again, he tidied himself, and his wife bore him a Son, Rasool was overjoyed and called his Son 'Gaith,' he gradually started cleaning Goldsmith shops and Cars and became picky which cars he cleaned 'I prefer BMW’s because their owners are better than you stinky people” sitting crossed legs in front of us smoking our cigarettes and drinking my 'Istikan' of tea. Of course he gets shoes flying all over him and he runs away.

I haven’t seen him for the past two years.

"I was told by a Friend of mine two days ago that last week, Rasools parents were searching for him in Karrada.

He was found in the Baghdad Morgue next day.

He had just finished cleaning cars that evening and was heading for home in Sadr city when someone 'forgot' a plastic bag in the Micro Bus.

All that was left of Rasool was his Humor & mischief."