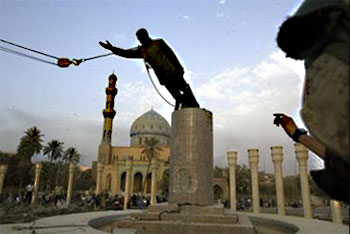 As extreme as it may seem, a thought occasionally crosses my mind these days while I'm riding my trail bike, scrubbing my pits in the shower or mowing the lawn at Kiko's House:

Were Iraqis better off under Saddam Hussein?

That would have been a extraordinary question to ask in 2003. Saddam was, after all, a saber-rattling tyrant. He operated a feared secret police, a system of prisons and psychiatric hospitals full of people who were tortured and held without charge or trial, as well as rape camps.

But three and a half years later, my question has taken on a shocking legitimacy because of the extraordinary mess that the Bush administration has made of everything it has done in Iraq.

While Saddam's brutalities cannot and should not be dismissed, they were not why the Bush administration beat the war drum so ferociously. Saddam, the White House argued, had to be taken out because he had WMDs, including a nuclear weapons program, had close ties to Al Qaeda and connections to the 9/11 terror attacks, and was a threat to regional stability and world peace. In his stead, a U.S.-nurtured democracy would grow and flourish, and Iraq would become a beacon of hope in the Middle East.

Well, Saddam was not a regional or global threat. He had no WMDs or nukes and no terrorist ties of consequence. His saber had been dulled and the Bush administration knew it. We were lied to.

The occupation has been a bloodbath of broken promises. The Iraqi people were lied to.

It is beyond unlikely that a democracy in the image of the neoconservatives who beat the war drum can be established, and Iraq today has become a genuine threat to regional stability.

One report, a stark assessment of terrorism trends by American intelligence agencies, says that the invasion and occupation have spawned a new generation of Islamic radicalism and that the threat from terrorists has grown since 9/11.

The other report, a U.N. analysis, finds that an extraordinary 7,000 Iraqis have been killed in the last two months alone and that things are likely to deteriorate further.

Wait. It gets worse:

Many of the resulting deaths are attributable to a level of torture far worse than under Saddam.

Many Iraqis, perhaps thousands, are being held without charge or trial.

There is no evidence of rape camps, but there is an epidemic of "honor killings" of woman and teenaged girls who are murdered after death sentences imposed by secretive sharia committees are carried out.

So here's another question that also has taken on a shocking legitimacy:

George Bush and his neocon cabal have taken a broken country and broken it all over again. They have succeeded in doing the impossible by making many Iraqis nostalgic for the bad old days.

Will the U.S. guarantee that Saddam Hussein's legacy is martyrdom instead of infamy?

I regret to say that I believe that it will.

Ahhh yes, the barking moonbat act is running again: "Well, Saddam was not a regional or global threat. He had no WMDs or nukes and no terrorist ties of consequence. His saber had been dulled and the Bush administration knew it. We were lied to"...

Oh yeah! On which planet was this Saddam not a regional or world wide threat? Was it within 80 million light years of reality?...:lol:

Woof woof back at you.

The Bush administration now acknowledges that Saddam had no WMDs or nukes, which would seem to limit if not eliminate his ability to inflict harm on his neighbors. But then there's that nail clipper that he always carried in his back pocket.

I suppose you are one of those passive aggressive right wingers who like being lied to.

Oh yeah! On which planet was this Saddam not a regional or world wide threat?

Was it within 80 million light years of reality?.

Reality is everywhere. Open your eyes. Or keep them closed, whatever helps you sleep at night.

Oh my dear, poor Davebo, already undergoing Bush Withdrawal Syndrome and it's only 2006.

Saddam WAS a threat for many years, but certainly not after 1998 as those inconvenient things called facts now clearly show.

Stop back tomorrow for my lead post on a little garden party called Operation Desert Fox. I go into some detail on why folks like yourselves insist on placing their cranial cavities up their backsides when it comes to buying into the Bush administration's serial obfuscations about the reasons it took us into the wrong war in the wrong place and the wrong time.