Song as 'Naked, Living and Amorphous Creature': The Words and Music of The Grateful Dead 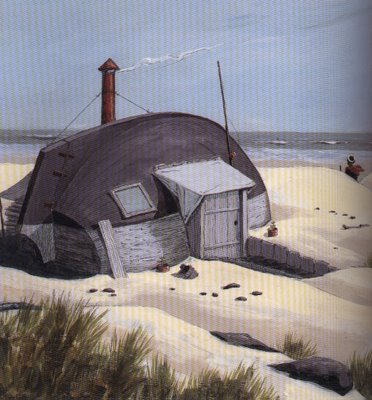 A pictorial representation of "St. Stephen" by Jim Carpenter
The lyrics and music of the Grateful Dead occupy a special place in the Great American Songbook.

This my seem like a strange claim if you are unfamiliar with the Dead. What, after all, would make the songs of the ultimate hippie dippy San Francisco band deserving of comparison to those of Irving Berlin, Harold Arlen, Rogers and Hart, Bob Dylan or Cole Porter?

I'll leave it to Robert Hunter, who wrote the lyrics to the vast majority of the Dead's original songs, to explain:

The songlist of the Grateful Dead has achieved an anomalous status within the archives of current pop culture. It begins to appear that our output embodied the summation and close of a musical era, rather than heralding a bright new beginning devoutly wished for. But it bears mentioning that our work was a natural and inevitable blending of rock and roll, jazz and traditional folk culture. It was, in its day, as shockingly innovative as the music of mounting urban psychosis that was to displace it. Its verbal and musical complexity offer little of overwhelming market value to a more intensively stratified current musical culture. I'm optimistically uncertain as to whether it is a dead issue or a ticking time bomb set to detonate long after its progenitors have quit this sphere of commercial sorrow. My own improbable dream was to aid and abet a unified indigenous America, or at least Western music, drawing on all bona fide traditional currents including pop. Tall order for a bunch of white kids. Big dreams. But jazz wasn't talking to pop, and bluegrass wasn't talking to the blues -- experimental postclassic soundscape wasn't talking to anyone.

* * * * *
I saw the Dead perform about 100 times from 1969 to 1978 and only two or three times thereafter. Hunter's most prolific songwriting period was from 1968, three years after the band's birth, to 1977, nearly two decades before his musical collaborator, lead guitarist Jerry Garcia, packed in.

Even at their best, the Dead could be maddenly inconsistent -- out of tune some nights and vocally challenged most nights. And pretty much consistently mediocre after 1977.

But it is a hallmark of the Dead's greatness, and Hunter's, as well, that their songs often are even better in the hands of fine interpretive singers like Elvis Costello, Suzanne Vega and Warren Zevon, and jazz musicians like Branford Marsalis, Billy Cobham and David Murray.

As Hunter came by his songwriting honestly, so did the Dead when it came to the part of their repertoire drawn from that fusion of indigenous American music.

Beyond the Hunter songbook, the Dead recorded and performed the music of Obray Ramsey, Merle Haggard, Howlin' Wolf, Chuck Berry, Buddy Holly and Bob Dylan, among many others. (Albums from all six artists are feature below this post in the Kiko's House Disk Picks for September.)

Speaking of Dylan, his rocking live performances of recent years (as opposed to the drearily static stage shows of yore) are attributable to the great master's tours with the Dead and the encouragement of Garcia, whom he acknowledges taught him to loosen up and connect with his audience.

* * * * *
I heard the Dead play Hunter-Garcia's "St. Stephen" a gadzillion times. I long thought the song was about Stephen Gaskin, founder of The Farm commune. It isn't. Perhaps it was literally about St. Stephen, the first deacon of the Christian faith. It isn't. Perhaps it referred to St. Stephen's, an Episcopal church in Marin County, California, where the Dead were said to have played very early on and where the memorial service for Garcia was held. Wrong again.

Hunter asserts that "St. Stephen" isn't about anybody or anyplace, and to him this matters not:

I believe that the lyrics themselves say all that wants saying but acknowledge that scholastic exegesis has a momentum of its own and it's not my business to impede it, though I always believe [the Dead] were "historicized" too early for comfort. I also believe, through experience that beneath the window dressing of metaphor and rhyme, song is a naked, living, and amorphous creature. Where some assume that song is transcription of self, my more intimate believe is that one goes out into the woods and ketches one, dresses it up, and trains it to talk. How the brute is trained is a matter of personal style, but beneath the window dressing, the song remains elusively itself, prevented from full expression by the limits of its intended use. The writer's prejudices, blindsides, and occasional strengths are all utilized in the disguising of the primordial beast into form adequate for its specific purpose.

* * * * *
The Hunter quotes are from David Dodd's "The Complete Annotated Grateful Dead Lyrics." More info on this terrific book here.

Love Hunter's riff about the closing of an era rather than the heralding of a new one. When I listen to The Dead now and they sing "Tennessee, Tennessee, there ain't no place I'd rather be..." or "Driving that train, high on cocaine," I hear old music tied to a more authentic America now gone. In 1979 I took a Greyhound bus from New York to Arkansas to check out a college. Throughout Tennessee an agricultural backwater unfolded before my eyes. A Confederate flag hung from the post in main square of Jackson. Today it's one big sprawl and mall landscape. Trains are a part of history and love of your home state also an antiquity. Ballads, and blues, and rivers and belles, traveling a wide open country; a world gone buy in that music.

Truer words were never spoken. That is why the songs of Ramsey, Berry, Holly, Hunter-Garcia et al must never be forgotten even if they get virtually no radio airplay.

They are our heritage on the truest sense of word.

Hey,
Thanks for the wonderful review and discussion of the book. Much appreciated!
--David Dodd