Iraq I: You May Be Dead, But You Don't Count 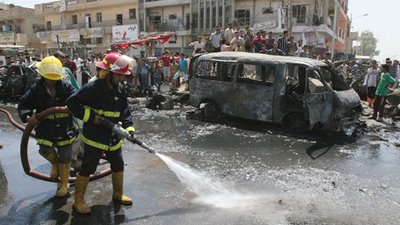 You didn't see this Baghdad car bombing. It never happened.
Meanwhile, back at the war that has diddly-squat to do with the 9/11 attacks, U.S. officials desperate to pluck victory from the jaws of defeat have stopped counting hundreds of Iraqi deaths as a result of car bombings or mortar attacks.

U.S. military spokesman Lieutenant Colonel Barry Johnson admits that only deaths of individuals killed in drive-by shootings or by torture or execution are being incluided in its tabulations of sectarian violence.

That has allowed U.S. officials to boast that the number of deaths from sectarian violence in Baghdad declined by more than 52 percent in August over July, but eliminates substantial numbers of people who have died in coordinated bombing attacks on apartment buildings and other targets.

Last week, Major General William B. Caldwell boasted that the murder rate in Baghdad had fallen by 52 percent from July to August and attributed most of the fall to new U.S.-Iraqi security sweeps of troubled neighborhoods.

But that claim was undercut by the Baghdad Central Morgue, which counted 1,516 violent deaths in August, about the same as July and June.


The prospects of securing turbulent western Anbar province, Iraq's largest, are dim and there's little the U.S. military can do to alter that situation, according to a secret report filed by the Marine Corps' chief of intelligence.

One Army officer summarized [the report] as arguing that in Anbar province, "We haven't been defeated militarily but we have been defeated politically -- and that's where wars are won and lost."

Anbar includes the towns of Fallujah, Ramadi and Haditha. All are held by insurgents. More than 22,000 Marines are based in the region, which has long borders with Syria and Jordan.

THE ROSE-COLORED GLASSES, PLEASE
Bill Crawford has another of his periodic "The Other Side" posts at NRO's The Corner, a comendium of good news from Iraq.