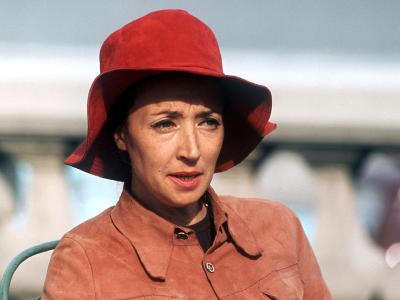 Oriana Fallaci, the journalist provocateur and outspoken opponent of militant Islam, has died at age 77.

Fallaci made her nut through war reporting and interviews with the rich and powerful, and once bragged that she was“the journalist to whom virtually no world figure would say no.”

Kissinger, President Nixon's secretary of state at the time, called the experience of sitting down with Fallaci “the most disastrous conversation I ever had with any member of the press” after she got him to admit that he sometimes felt like “the cowboy who leads the wagon train by riding ahead alone on his horse, the cowboy who rides all alone into the town.”

I must admit that Fallaci sometimes drove me to distraction. Her career seemed to go into eclipse in the 1990s, but she emerged re-energized after the 9/11 attacks and wrote three books that not only attacked Islamic extremism but Islam itself.

I will leave the last word to Wretched of The Belmont Club, who wrote this tribute:

I had the privilege of listening to a lecture by Oriana Fallaci at Harvard sometime in 1983. I realize now that she was 53 and it must have been at around that time that the picture below was taken because that is precisely how I remember her. I can't recall the subject of the lecture, but I have an intense memory of her leaning forward on the podium smoking a cigarette (incessantly) and removing the thin, dark jacket she was wearing to hang it on a nearby chair. I never saw her again.

A few months ago, a friend in Manhattan attended to what must have been one of her last public appearances. By then she was 76 and very sick of cancer. And still she spoke, through the written word and at small gatherings. And this time I paid attention, not to a woman in the autumn of her beauty, but to a warrior in the fullness of her strength. At the time of her death Oriana Fallaci was facing a suit in Italy for daring to suggest that her country and culture were under threat from radical Islam. In her youth she did not bow to Hitler; and in her old age she hurled defiance at yet another tyranny. The darkness came and yet the darkness claimed her not.

Posted by Shaun Mullen at 8:46 AM
Email ThisBlogThis!Share to TwitterShare to FacebookShare to Pinterest