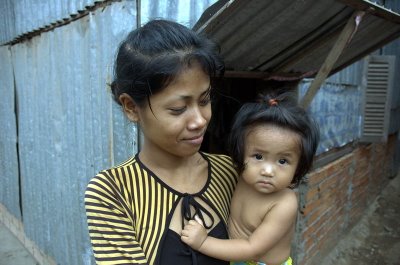 Photograph and Commentary by Steve Goodman

Why do I love living in The Kingdom of Cambodia? The lovely Khmer people are some of the world’s warmest, friendliest, and downright nicest folks. The warm tropical climate agrees with me and contributes to the production of a wide variety of delicious tropical fruits. It is a ceaselessly fascinating place, although not a place everyone will like or feel comfortable visiting. There is extreme poverty, social inequality (everything from rampant land-grabbing to oppression of ethnic minorities), corruption and lack of reliable infrastructure. On the other hand it is good cheap living there. You can get a great apartment for $150 a month and eat a tasty breakfast of rice, fried egg and barbecue pork for 50 cents, which is pretty hard to beat.

Cambodia’s cultural heritage and social structure is as interesting, complex and inscrutable as that of any country with thousands of years of history. From the magnificent temples of Angkor Wat to Apsara dancing, modern hip-hop influenced pop music and traditional foods such as the unusual Prahok, Cambodia’s rich cultural heritage is a source of pride for its citizens and wonder for tourists and ex-pats.

As a student of Buddhism I enjoy proximity to the many temples and monks. Cambodia is 95 percent Buddhist with small Christian and Muslim minorities. There are thousands of Buddhist temples, called Wats or Pagodas, in the country and more than 100,000 monks who can be seen each morning begging for alms of money and rice.

Cambodia is one of the poorest countries in the world and has what many regard as one of the most systemically corrupt governments, as the poorest countries everywhere tend to have. But the country is at peace with all of its neighbors -- Thailand, Laos, and Vietnam -- and life for many continues to improve since the early 1990’s when the UN spent over $2 billion in a massive effort to help turn things around for this war-torn nation of 14 million.

I am a photographer, philosopher and life-long student and I’m able to pursue all of these interests in a place that is ripe with exotic, sometimes tragic and surprisingly beautiful photo opportunities, where the people have a unique perspective and outlook on life and almost always smile despite the sad history and difficult struggles of their proud nation. While many, if not most, of these smiles are quite genuine, one must remember that in Asia all things are not as they seem (are they anywhere?) and a smile is commonly used to mask one’s true thoughts and emotions. Some of the seemingly nice, smiling friendly faces belong to ruthlessly cold and brutal people who would cut your throat without a second thought if it meant self-enrichment or advancement. Many Cambodians still suffer from PTSD (post traumatic stress disorder) due to the extreme poverty, often dysfunctional government, and a disturbingly violent modern history.

I live in Phnom Penh, Cambodia’s reasonably modern capital (population1.5 million). However the vast majority of Cambodians live with their extended families in small villages and barely get by with subsistence level farming and fishing. A travel writer once said something to the effect “visit Cambodia, which can be found just 20 miles in any direction from Phnom Penh.” It is not difficult to find English speakers in the country’s cities and American dollars are accepted everywhere, as is Cambodia’s own currency the riel.

Many Westerners live and work in Cambodia. I’m not sure of the population country-wide, but in Phnom Penh alone there are easily more than 7,500 Westerners and over 100 bars and restaurants that cater almost exclusively to the Western ex-pat and tourist market. The community of Westerners can be divided into a number of fairly homogenous groups -- the French, English teachers, NGO do-good workers, and adventure-seekers. A sub-group of the adventure-seeker population of ex-pats is commonly referred to as sex-pats (sex tourists) due to the prevalence of prostitution.

If you are like most Westerners you probably have a vague notion of the Khmer Rouge and Pol Pot’s regime, which nearly completely destroyed the country in the 1970’s when nearly 2 million people died from torture, murder, starvation and abject neglect. At that time the neo-Maoist government outlawed religion, money, education and diplomacy and even treated those among their own ranks with a brutal callousness In fact, most government ministers, doctors, teachers, and lawyers were savagely killed. The echoes of this utter destruction of the social fabric and decimation of the intelligentsia still ring out in many dimensions even today.

Only now are the UN trials of the Khmer Rouge for war crimes and other atrocities beginning. How do Cambodians feel about the upcoming Khmer Rouge trials set to commence next year? Feelings range from apathy to unbridled enthusiasm. While many are fervently in favor of finally bringing the few remaining Khmer Rouge leaders to justice, just as many are deeply distrustful of Cambodia’s government and judicial system, commonly thought by many, Cambodians and others, to be among the most corrupt in the world.

There are three main political parties in Cambodia -- the CPP (Cambodian People’s Party) is the ruling party, FUNCINPEC, and the opposition party known as the Sam RainsyParty. Most Cambodians are apolitical, too busy trying to eke out a living for themselves and their families. It is also difficult to gauge the validity of what a Cambodian may tell you about what he or she is thinking due to the often repressive atmosphere where people who exercise free speech are silenced with impunity by being jailed or worse. Anyone with money, power and influence has connections to the police, army and government, all of which can be leveraged to have people sued, jailed or killed.

Although today the problem is more under control than it was just 10 years ago, there still remain an estimated two to five million landmines throughout the country. Something like 1 out of every 385 people in Cambodia are missing hands, feet, legs or arms due to the prevalence of landmines dating back to the Vietnam War era. Many of these unfortunate souls are forced to become beggars along with the elderly, all of whom are unfairly ostracized by mainstream society.

As in the neighboring Kingdom of Thailand, the Khmer people love their king. The reigning monarch, King Sihamoni, has been on the throne for only a few years. He is steadfastly apolitical, is how he came to be king through the long-standing leadership of the prime minister, Hun Sen. The king is the son of former King Norodom Sihanouk, a colorful and enigmatic figure who played a key role in shaping modern Cambodian history.

The biggest and only cash cow for Cambodia is textile production and export, which bring in about $3 billion a year. Unfortunately, many textile factories operate with sweatshop conditions with long hours, low pay, and few rights for the poor workers.

About half of the central Cambodian government’s annual operating budget comes from what are known as “donor countries” which include Japan, Korea, China, France, the U.S. and other Western nations. Much of the social welfare and education in Cambodia is performed or financed by NGOs, non-governmental organizations such as UNICEF, the Red Cross, Doctors Without Borders and Wild Aid. More than a thousand such organizations operate in Cambodia today.

In Cambodia, as virtually everywhere else in Southeast Asia bargaining for what you want to buy is de rigueur. Most shopkeepers and market vendors will start out asking at least double what a fair price might be. In places where tourists frequent, like Phnom Penh’s massive 1920’s art deco Central Market (in Khmer Psar Thmey), it is not uncommon to be quoted a price that is five times the fair going rate. Buyers beware!

I find that despite its many seemingly intractable problems, Cambodia’s positive qualities far outweigh the negative and I’d encourage you to come for a visit and find out for yourself.

* * * * *
Steve Goodman blogs at mythicaldude. He has been traveling throughout Southeast Asia and taking photographs since 2002. Click here for more. Click here to read more about Steve.

Click here for an article on how Cambodians are struggling to comprehend their criminal justice system as the Kmer Rouge trials approach.

Khmer440 is the most popular English-language blog in Cambodia. If you're a foodie, you might want to check out Phnomenon. Yum!
© 2006, Steve Goodman
Posted by Shaun Mullen at 3:19 AM
Email ThisBlogThis!Share to TwitterShare to FacebookShare to Pinterest

According to reliable furniture shop in Phnom Penh
construction materials information, having invented the first air jet tub, BainUltra has a renowned reputation of providing bathtub of luxury and resort retreat.
As of today, the firm has a comprehensive range of bathtub models for clients to opt from for personalizing their own bathrooms according to their flavors.
Altogether, the freestanding tubs come with Thermomasseur and Thermasens therapeutic baths with preserving heat, bubble, massaging air jets, Geo tech, and lovely attar.
The firm’s most noticeable bathtubs are Amma, Origami, Naos, Ayoura, and its newest design tub Evanescence, all with distinctive and practical design to sooth a huge scale of demanding clients.