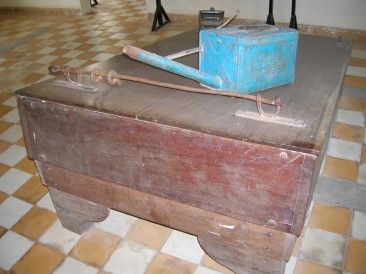 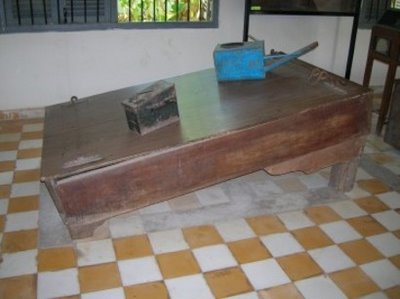 This is a waterboard and it is not used for cleaning dirty laundry. It is a torture device. Its use to extract information is entirely legal under a newly enacted law in the United States of Torture.

The photographs were taken by anthropologist Jonah Blank at Tuol Sleng Prison in Phnom Penh, Cambodia, which is now a museum that documents Khymer Rouge atrocities.

Explained Blank a few days before the new torture law was passed:

"Is waterboarding torture? Anybody who considers this practice to be 'torture lite' or merely a 'tough technique' might want to take a trip to Phnom Penh. The Khymer Rouge were adept at torture, and there was nothing 'lite' about their methods.

"The similarity between practices used by the Khymer Rouge and those currently being debated by Congress isn't a coincidence. As has been amply documented . . . many of the techniques came to the CIA and military interrogators via the SERE [Survival, Evasion, Resistance and Escape] schools, where U.S. military personnel are trained to resist torture if they are captured by the enemy. The specific types of abuse they're taught to withstand are those that were used by our Cold War adversaries. Why is this relevant to the current debate? Because the torture techniques of North Korea, North Vietnam, the Soviet Union and its proxies -- the states where US military personnel might have faced torture--were not designed to elicit truthful information. These techniques were designed to elicit confessions.

"Bottom line: Not only do waterboarding and the other types of torture currently being debated put us in company with the most vile regimes of the past half-century; they're also designed specifically to generate a (usually false) confession, not to obtain genuinely actionable intel. This isn't a matter of sacrificing moral values to keep us safe; it's sacrificing moral values for no purpose whatsoever."

(Hat tip to David Corn at DavidCorn.Com)
Posted by Shaun Mullen at 5:09 AM
Email ThisBlogThis!Share to TwitterShare to FacebookShare to Pinterest