Iraq: The Devolution Will Not Be Televised 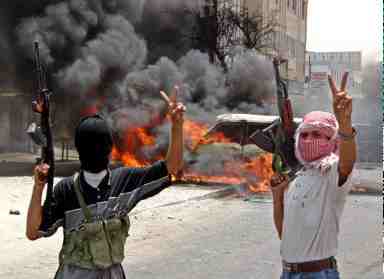 The devolution of Iraq into anarchy continues apace as portions of the militia run by Moktada al-Sadr, the immensely powerful radical Shiite cleric, have broken away and become independent death squads.

"The question of how tightly Mr. Sadr holds the militia, one of the largest armed groups in Iraq, is of critical importance to American and Iraqi officials. Seeking to ease the sectarian violence raging across the country, they have pressed him to join the political process and curb his fighters, who see themselves as defenders of Shiism — and often as agents of vengeance against Sunnis."

The development is yet another damned-if you-do, damned-if-you don't situation stemming from a catastrophic three and a half year old war.

Sadr has taken a more active role in the government. That,of course, is a good thing. But this has resulted in the defection of as many as a third of his militiamen, who are selling their services as assassins and torturers to the highest bidders. That, of course, is a bad thing.

BASELESS SPECULATION
As I noted back in June, no matter when the U.S. draws down troop levels, it still will want to have a formidable presence in Iraq in the form of one or more large and permanent military bases, especially since it was reducing its presence in Saudi Arabia and had closed the massive Prince Sultan Air Base when it took Baghdad in 2003.


I wondered how the idea of permanent bases would go over with the radical Islamists who have emigrated to Iraq in the service of making it an Islamic republic, let alone Muslims who cannot wait for the U.S. presence to diminish.

Well, to my semi-surprise, the House voted this week to bar the construction of permanent bases precisely because of concerns in the Arab world that American forces will remain in Iraq indefinitely. The Senate is expected to follow suit.

POLICE ACADEMY -- NOT THE MOVIE
In yet another instance of the politically connected Parsons Company blowing a project in Iraq, it so botched construction of the $75 million Baghdad Police college that it poses health risks to recruits and may need to be partially demolished.

The college was hailed as crucial to U.S. efforts to prepare Iraqis to take control of the country's security, but is so poorly constructed that feces and urine rained from the ceilings in student barracks. Floors heaved inches off the ground and cracked apart. Water dripped so profusely in one room that it was dubbed "the rain forest."

Parsons had previously screwed up a $243 million health-care clinic network project and a $99 million prison project. More here and here.


Defense Secretary Rumsfeld lies even in the rare instances that he acknowledges problems with the Mess in Mesopotamia.

Says he in a new CNN documentary:

"Well, I think that anyone who looks at it with the benefit of 20/20 hindsight has to say that there was not an anticipation that the level of insurgency would be anything approximating what it is."

There's a wee problem with that statement. Rumsfeld and his war planning minions were warned repeatedly and in the strongest terms that if they did not have enough troops and plan thoroughly for a post-war occupation, there would be a growing insurgency. The rest, as they say, is history: Rumsfeld sent the U.S. to war on the cheap and glossed over occupation planning.

More here.
WAR RAGES ON, MEDIA SNOOZES
MSNBC's Chris Matthews opined the other day that "I watch the news; I don't see the war any more."

"A review of network news logs proves Matthews was dead-on in his assessment; coverage is way down this month. Unfortunately, Matthews later misspoke when he suggested it's the American people who are bored with Iraq and that the press has simply responded to news consumers' lack of interest by cutting back on its war reporting. But there's no evidence that the American people are bored with the war. In fact, the issue of Iraq and the war was chosen by voters as "the most important issue facing this country today," according to the latest CBS/New York Times poll."

Boehlert notes that the cut and run comes at a terrific time for the White House as it attempts to shift voters' attention away from Iraq and move it over to the War on Terror. He notes that there was a similar retreat during the fall of the 2004 presidential campaign, and substantial coverage could have hurt to the Bush-Cheney ticket. Instead, the media focused on hurricane updates, Martha Stewart's legal woes, and the Laci Peterson trial.
Posted by Shaun Mullen at 4:41 AM
Email ThisBlogThis!Share to TwitterShare to FacebookShare to Pinterest