The Terrorists Who Believe 9/11 Was a Mistake 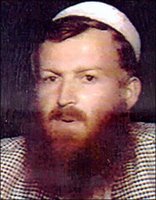 Lawrence Wright is not resting on his laurels following publication of "The Looming Tower: Al Qaeda and the Road to 9/11," which in my estimation is one of the two best books written on the run-up to the terror attacks. (*)

In an article in the current New Yorker, Wright presents a picture of the intellectual history of Al Qaeda rather different than contemporary accounts and explains why Abu Musab al-Suri (photo), a Syrian who had been a member of Al Qaeda’s inner council, and a surprisingly number of other Islamic radicals believe the 9/11 attacks were a grave mistake.

"[Suri] bitterly blames Al Qaeda for dragging the entire jihadi movement into an unequal battle that it is likely to lose. Unlike most jihadi theorists, Suri acknowledges the setback caused by September 11th. He laments the demise of the Taliban, which he and other Salafi jihadis considered the modern world’s only true Islamic government. America’s 'war on terror,' he complains, doesn’t discriminate between Al Qaeda adherents and Muslims in general. 'Many loyal Muslims,' he writes, believe that the September 11th attacks 'justified the American assault and have given it a legitimate rationale for reoccupying the Islamic world.' But Suri goes on to argue that America’s plans for international domination were already evident 'in the likes of Nixon and Kissinger,' and that this agenda would have been pursued without the provocation of September 11th. Moreover, the American attack on Afghanistan was not really aimed at capturing or killing bin Laden; its true goal was to sweep away the Taliban and eliminate the rule of Islamic law."

(*) The other book is Steve Coll's "Ghost Wars: The Secret History of the CIA, Afghanistan, and Bin Laden, From the Soviet Invasion to September 10, 2001." Go here and here for info about these books.
Posted by Shaun Mullen at 3:16 AM
Email ThisBlogThis!Share to TwitterShare to FacebookShare to Pinterest