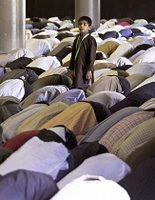 The flow of Muslims to the U.S. dropped dramatically after the 9/11 attacks, but are again emigrating in large numbers.

Statistics compiled by the Department of Homeland Security and Census Bureau reveal that 96,000 emigres from Muslim countries in the Middle East, North Africa and Asia became permanent legal U.S. residents in 2005, more than in any year in the previous two decades.

More than 40,000 of them were admitted last year, the highest annual number since the terrorist attacks, according to data on 22 countries provided by the Department of Homeland Security.

Many have made the journey unbowed by tales of immigrant hardship, and despite their own opposition to American policy in the Middle East. They come seeking the same promise that has drawn foreigners to the United States for many decades, according to a range of experts and immigrants: economic opportunity and political freedom.

Those lures, both powerful and familiar, have been enough to conquer fears that America is an inhospitable place for Muslims.

THE FIRST MUSLIM IN CONGRESS?

A black Minnesota state lawmaker could become the first Muslim elected to Congress after edging out three rivals for his district's Democratic nomination.

Keith Ellison, 43, prevailed after overcoming questions about parking tickets, overdue taxes and his ties to the Nation of Islam. Because the district has long been dominated by Democrats, he will be a heavy favorite to win the Minneapolis-area seat in November.

Ellison courted the liberal wing of the Democratic-Farmer-Labor Party by comparing himself to the late Sen. Paul Wellstone -- and many voters responded. Others relished the chance to elect a minority to Congress from Minnesota for the first time
Posted by Shaun Mullen at 3:12 AM
Email ThisBlogThis!Share to TwitterShare to FacebookShare to Pinterest