Iraq III: When the Facts Get in the Way 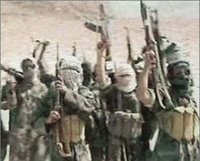 One by one, the facts are lining up to give substance to the Bush administration's serial deceits.

And it was long known that the Iraq war, instead of bringing terrorism to heal as the White House has presistently claimed, has made it much worse.

A new National Intelligence Estimate, the most authoritative document produced by the U.S. intelligence community, states the obvious -- that the war and occupation have made the overall terrorism problem worse by helping grow a new generation of Islamic radicalism.

The White House had released a happy face terrorism assessment on the 9/11 anniversary focusing on its success in removing members of the top tier of Al Qaeda, but the intelligence assessment, portions of which were leaked to The New York Times, paints a more sobering picture:

* The radical Islamic movement has expanded from a core of Al Qaeda operatives and affiliated groups to include a new class of “self-generating” cells inspired by Al Qaeda’s leadership but without any direct connection to Osama bin laden.

* The Internet has helped spread jihadist ideology, and cyberspace has become a haven for terrorist operatives who no longer have geographical refuges like Afghanistan.

Release of portions of the estimate put administration terrorism czar John Negroponte in a bind. How could he deny the veracity of a report prepared by the intelligence agencies he works so closely with? He didn't, merely saying that it was being taken out of context. Duh-oh!

Andrew Cochran writes at the Counterterrorism Blog that the entire estimate should be vetted by the 9/11 Commission to put an end to the political arguments over its value and accuracy.

Meanwhile, the estimate comports with a recent Council on Global Terrorism report which assigned a grade of “D+” to U.S. efforts to combat Islamic extremism.

The highly respected group of terrorism experts concluded that:

“There is every sign that radicalization in the Muslim world is spreading rather than shrinking."

(Hat tip to Glenn Reynolds at Instapundit for the Cochran item.)
Posted by Shaun Mullen at 12:10 AM
Email ThisBlogThis!Share to TwitterShare to FacebookShare to Pinterest