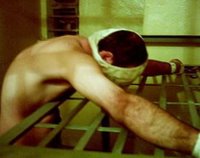 The good news is that four more moderate Republican senators have joined the original four senators (three of whom are war veterans, as opposed to the chickenhawk president), and well as five moderate House Republicans who initially were instrumental in blocking a White House-back wiretapping bill in the Judiciary Committee but finally were outvoted. (More here.)

The bad news is that Senate Majority Leader Bill Frist, who is a Bush suck-up extraordinaire, and other White House allies will filibuster the dissident-supported bill. With only a few days to go before congressfolk return home to campaign and explain to their constituents why they haven't done jack sh*t since the last election, the bill is all but dead. (More here.)

CHRIST ALMIGHTY WHAT PALS
Andrew Sullivan has been a tireless crusader against U.S. government-sanctioned torture over at The Daily Dish. A practicing Roman Catholic, Andrew notes without irony how silent the Christian right wing has been on the subject considering that their precious Jesus Christ and some of his Apostles were tortured.

"Why? Torture is not a hard issue for any Christian. It is an unmitigated moral evil. There is no theology on earth which can make it a less grave moral matter than, say, gay marriage. And yet it has been enforced by this president for five years and where is the outrage? You would imagine that James Dobson would have organized a massive phone-in or email blitz to Capitol Hill on the detainee legislation. You would imagine that every theocon from Ponnuru to Neuhaus would be writing about this every day and night. But nah. Gays getting married in one state out of 49? Massive, coordinated outrage, sermon after sermon, direct mail blitz after direct mail blitz, and a threatened constitutional amendment. The president authorizing torture? You can hear a pin drop on the religious right. Tells you something, no?"

"People are debating whether the ‘conflict’ among Republicans over the detainee/ interrogation bill is part of some grand Rovian political plan (to make Republicans appear as though they are independent and willing to stand up to the President, to ensure that scary pictures of Khalid Shaikh Mohammed rather than piles and piles of bodies in Iraq dominate the news, etc.). Regardless of one's views on that question, one thing is beyond dispute at this point: the White House's plan to resolve the NSA scandal by obtaining amnesty for past lawbreaking and future legislative blessing for its warrantless eavesdropping program has veered far off course and, at least for now, appears genuinely imperiled."

When I read this I got out my teeny weenie violin and played a sad song.
Posted by Shaun Mullen at 3:39 AM
Email ThisBlogThis!Share to TwitterShare to FacebookShare to Pinterest

Maybe there is a grand Rovian plan.

One thing that is continually ignored in these discussions on the "opposing" torture proposals is:

1) BOTH plans suspend Habeus Corpus. Without that, almost anything can be done "within the law," if not within the Constitution.

2) We don't need a law to control torture. The Geneva Convention has worked just fine for over 50 years without "clarification." As part of this controversy, a number of military leaders have said they carry a card with them wherever they go. The card states Article III and comforts them that they know the limits.

Boy does the forest ever get lost for those damned trees.

Your are absolutely right, CWhite. We have the laws, treaties and conventions to deal with these issues. We just have a president (Bush) and puppet master (Rove) who are drunk on power.

Hello Shaun and all,

All three Faiths of Abraham spawn violence and hypocrisy

Christians and Jews are able to smugly lecture and chastise Muslims about violence, because followers of Islam are poorer and more oppressed and are forced to defend themselves in cruder fashion. On the other hand, the rich and powerful nations of the west can train and equip militaries and intelligence services to do their bidding. Likewise, well-funded and smooth-talking politicians expertly equivocate about acceptable collateral damage to the homes, and lives of poor people in other lands. With so many dollars spent, why don’t Muslims and others simply shut up and accept being exploited, oppressed, and massacred for such nobly expressed western ideals?

Those in representative democracies tout their governments as extensions of the citizenry. Accordingly, so are the militaries, intelligence services, corporations and other proxies used to expand and maintain the Judeo-Christian Empire. By extension, the citizens of western nations are much more responsible for the actions of criminals, killers, and torturers paid for and authorized by democratic institutions than people who live in less democratic nations who have much less control over the actions of their leaders.

It is undeniable that the Bush administration, its cohorts, and supporters are mostly Christian. Without the blind support of so many Judeo-Christians, the Bush administration would not now be embroiled in the current struggle to retroactively legalize torture, illegal domestic spying, and other crimes. By US law, hiring a proxy to murder or assault someone is still prosecuted as murder and assault. It is undeniable that the militaries and intelligence services of the west that kill and torture at the behest of democratic representatives are hired proxies of Judeo-Christian citizens.

Regardless of attempts to shift blame, history clearly records the widespread crimes of Christianity. Whether we're talking about the abominations of the Inquisition, Crusades, the greed and genocide of colonizers, slavery in the Americas, or the Bush administration's recent deeds and results, Christianity has always spawned great evil.

So, the next time any Christian, Jew, or Muslim, whether president, prime minister, religious leader or follower decides to chastise others for their failings, stop to consider that the logs in your own eyes have blinded you to the full truth about all three faiths of Abraham. Religion has utterly failed to solve humanity's problems because it is a strong delusion that spawns error and evil instead. The sheep's clothing of duplicitous ideals is an obvious deception used to hide the truth. Nonetheless, the veil is readily pierced by discerning the fruits of their deeds.