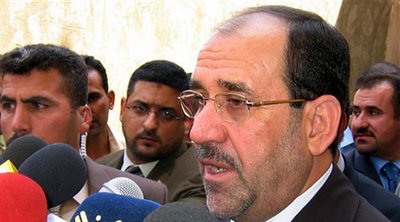 The vultures are circling over Nuri Kamal al-Maliki and it seems like it will only be a matter of time before the embattled Iraqi prime minister is shunted aside -- or assassinated.


In fairness, Maliki has an impossible job. He stepped into the top job in a country wracked by a botched U.S. occupation and doing a pretty good imitation of being in a civil war. He has had to suck up to his fellow funadamentalist Shiite leaders, some of whom have their own private armies, or risk losing his shaky mandate.

Maliki has been in the job for four months and is a notable improvement over his predecessor, Ibrahim al-Jaafari, who now leads Maliki’s Islamic Dawa political party. But while Maliki has talked the talk, he has not walked the walk, and Iraq will not survive by words alone.

Maliki has failed to move aggressively to deal with sectarian strife, stanch defections from the Army and restore fundamental services like electricity and water, which still are a far cry from pre-war levels. Meanwhile, the economy continues to founder and the goal of a unity government seems even more elusive.

His relationship with his American babysitters also has been shaky. While supporting security sweeps in Baghdad neighboroods in principle, he stupidly denounced the assault last month by American and Iraqi soldiers on a militia safe house and promised compensation to the families of people killed and wounded in attack. He also has threatened to try U.S. soldiers accused of crimes against Iraqis, which has not endeared him to the Pentagon brass.

A major sticking point is Maliki's failure -- or refusal -- to rein in Moktada al-Sadr, the powerful Shiite cleric who commands the Mahdi Army, which has been blamed by many minority Sunnis for sectarian killings.

IRAQ AND A 'FREE' PRESS
I was just saying the other day that one of the more arcane aspects of the war in Iraq has been the gap between something that is known to be true and the information proving that so, a prime example being the selective use of intelligence to fit the Bush administration's rationale for invading Iraq. It took months before the first articles appeared providing the factual underpinnings for that reality.

Now comes one Willem Marx, who in an astonishing confessional explains how he sliced and diced news stories for the infamous Lincoln Group, which was hired by the Pentagon to feed positive news to Iraqi journalists.

"Jon quickly sketched out my new I.O. responsibilities. An Army team inside the Al Faw palace, another of Saddam's former residences, would send me news articles they had cobbled together from wire stories and their own reports from the field. It was my job to select the ones that seemed most like Iraqis had written them. I was then to pass these articles along to our Iraqi employees, who would translate the pieces into Arabic and place them in local newspapers. Jon told me that the U.S. Army could hardly carry out this work in their military uniforms, so they hired Lincoln Group, which could operate with far fewer restrictions. It was a bread-and-butter contract, he said, that paid the company about $5 million annually. I asked if the newspapers knew that Lincoln Group or the U.S. military were behind these articles. They did and they didn't, Jon said. The Iraqis working for us posed as freelance journalists, but they also paid editors at the papers to publish the stories -- part of the cost Lincoln Group billed back to the military. 'Look,' Jon assured me, 'it's very straightforward. You just have to keep the military happy.' "

More here.
Posted by Shaun Mullen at 3:47 AM
Email ThisBlogThis!Share to TwitterShare to FacebookShare to Pinterest